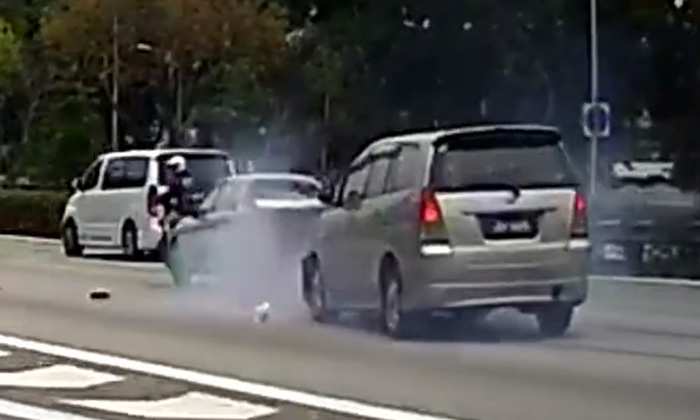 What happens when a car abruptly comes to a halt in the middle of an expressway? Exactly this:

In the Beh Chia Lor - Singapore Road's Facebook video below, the Nissan Sunny driver is seen bringing the vehicle into a standstill in the middle of the expressway.

Based on the date and time stipulated in the footage, the incident took place at around 1.25pm on Oct 3.

Due to the sudden stop, the Malaysian Toyota Innova behind could not stop in time and collided with the Nissan Sunny.

In the video, smoke is seen and the rear of the Nissan Sunny is ripped into pieces upon impact.

Thankfully, the motorist and other vehicles nearby were left unscathed.

Many Facebook users have commented with regard to this incident.

"Well, if this was a staged accident to scam insurance repairs, I would say that the Nissan Sunny driver is unlucky to have scammed a Malaysian car."

"It is a very dangerous act. The Toyota Innova driver was unable to avoid in time and crashed into the front vehicle. I hope no one was hurt," another user commented.