Here's what to do when I die: Singaporeans reveal how they prepare for own funerals 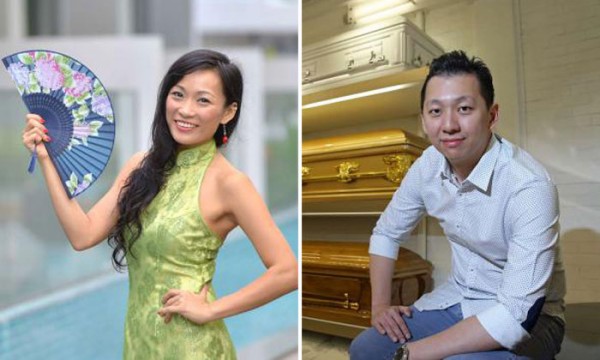 Years before his death, boxing legend Muhammad Ali was already planning his own funeral with help from his closest friends and family.

It was to be held at his hometown of Louisville, Kentucky in the United States. There was to be a traditional Muslim prayer service, along with another inter-faith memorial service.

So detailed were Muhammad Ali's plans that the document, dubbed "The Book", reportedly grew to 5cm thick.

He died last month at age 74 after a long battle with Parkinson's disease.

The Champ is not alone in scripting his own plans for the final farewell. Some Singaporeans who are alive and well have also left standing instructions with funeral companies about their wake and funeral.

The photo for the obituary, the flowers, the music - these people have everything planned out.

Far from being uncomfortable about discussing their death, they want an active hand in planning their own funeral while they are alive.

As financial planner Kennard Lee, 31, puts it: "I am the best person to know what I want."

Customised funeral services have been available here for many years. But it is only in recent years that more people in good health are taking them up, three funeral companies told The Sunday Times.

Direct Funeral Services, for example, saw about 15 customers last year who spelt out their post-death wishes in black and white. They were an equal mix of men and women, mostly in their 40s and older. There were no such requests in 2000.

Direct's managing director, Ms Jenny Tay, 30, believes this is because there has been a national conversation about death in recent years, such as news reports on making living wills and signing an Advance Medical Directive (AMD).

An AMD is a legal document signed in advance to state that one does not want any life-sustaining treatment when terminally ill and unconscious and when death is imminent.

These have all helped to raise awareness of the importance of planning ahead, says Ms Tay.

Customers typically meet staff from a funeral company to work through their preferences. Some companies also ask for a third party to be present as a witness.

Payment should be made before the customer dies, or settled after that by a relative or friend. Costs can range from $1,500 for a simple funeral and cremation to a five- figure sum for more elaborate affairs.

Funeral companies generally try to accommodate all requests, including more unusual ones such as providing champagne or karaoke facilities at the wake.

From Ms Tay's experience, if no planning is done, family members often do not know the wishes of the dead. When decisions have to be made, disagreements can break out.

She adds: "I believe family members definitely want to execute a funeral according to the preferences of the deceased. So I would encourage people to make them known."

Mr Ang Ziqian, 35, chief executive of Ang Chin Moh Funeral Directors, observes that those who plan in advance tend to be single or have children of a different religion.

He says: "In the past, planning your own funeral was considered taboo. But nowadays, more people want to say goodbye in their own way."

Madam Lee Shyr Shyr, 68, is one who has worked out her own send-off to the last detail.

The retired businesswoman, who is single, has arranged with Ang Chin Moh Funeral Directors to have her body placed in a white coffin and cremated without a wake.

She wants her ashes to be placed in a biodegradable urn shaped like a sea shell and buried at sea.

This will be done at a designated site about 2.8km south of Pulau Semakau.

Madam Lee says: "I don't want my ashes to be stored in a columbarium - I have no children to visit me. I want to be with the sea, surrounded by beautiful scenery."

For Ms Ang Jolie Mei, it was her father's death that prompted her to plan for her own.

The late Mr Ang Yew Seng, founder of Ang Yew Seng Funeral Parlour, died of renal failure in 2004 without leaving instructions for his wake and funeral.

Ms Ang, 35, now the director of The Life Celebrant, another funeral company, recalls: "We had to guess at what he wanted."

When she dies, she wants to be dressed in her favourite lime-green cheongsam and her wake will be decorated with red roses. On display will be her collection of about 20 fans from around the world, which she is very proud of.

Nobody is to wear black and there will be a karaoke machine for guests to dedicate songs to her.

The dance enthusiast also wants a memorial service at a salsa club in Clarke Quay with a dance floor and a live band playing Latin music.

She says: "Not many families I serve know that I love salsa, cha cha cha and merengue. I dance two or three times every week.

"At my service, I want everyone to celebrate my life and the things I like."

Financial planner Kennard Lee has a good reason for planning his own funeral.

The 31-year-old has had a close brush with death, having been diagnosed with Stage 4 non-Hodgkin's lymphoma, a type of blood cancer.

At age 23, he collapsed at home, bleeding from his nose and mouth. Doctors found a tumour the size of a brick in his chest.

He recalls: "The tumour was too close to my heart and could not be removed surgically. At one point, doctors told my family to prepare for the worst."

The only option was chemotherapy. After 15 rounds of the treatment, Mr Lee lost all his hair and had to temporarily stop his studies at the Singapore Management University. The painful treatment took more than a year and he was declared cancer-free in 2010.

He has since received his business management degree, married a conference manager and now lives in a five-room HDB flat in Punggol. The couple have no kids.

His near-death experience has shown him how fragile life is.

"You can go any time. You often cannot predict when or how," says the Christian.

"When I was sick, my parents didn't broach the subject of what to do should I go. Now that I have been given a second chance - and still have clarity of mind - I want to decide for myself."

Upon his death, he will be dressed in a tailored tuxedo suit, with his hair styled neatly, and placed in a white coffin. His photo - showing him dressed in business attire - will be fringed with blue and white hydrangeas.

Says Mr Lee: "I love the colour white. I attended Raffles Institution (RI), so I guess wearing an all-white uniform for four years rubbed off on me."

He wants a quarter-page newspaper obituary listing his immediate family members, along with a poem he plans to write. His wake will be a Christian one, playing mainly worship songs. During his funeral, he wants his guests to sing the RI school song as well as the Officer Cadet School song.

"I was an army officer during my national service stint and was very proud to be one. My school years also did a lot to mould me into the person I am today," he explains.

"Basically, I want those attending my wake and funeral to know what is important to me."

His wife, Ms Cherie Wong, 29, who stood by him throughout his illness, says: "Everything that happened has taught Kennard to re-evaluate his life and plan for the future.

"I fully support his decision to plan for his funeral because he is the best person to decide on this after what he has gone through."

Party at my wake

When he dies, Mr Michael Chua wants his wake to be a party.

There will be a bar serving a free flow of wine, spirits and cocktails. A random selection of jazz and electronic blues tunes will play from his Spotify phone app.

His guests - he has not decided how many yet - will chill out in this laidback atmosphere. They can dance if they want to.

Says the non-religious, free- spirited man: "At my funeral, I want to be surrounded by everything that represents me - good friends, food and music.

"After all, it will be the final time my friends are around me. I want them to enjoy themselves. I have always loved a good house party. I expect them to make me the stiffest drink."

The 42-year-old video and film producer, who is married to a Japanese working in the service industry, began planning for his wake four years ago, after a conversation with a friend. The couple have no children.

He says: "I have always been interested in death. Not in a morbid way. But I wonder about the randomness of it all. Why some people die from illness, others from accidents.

Dogs are welcome at his wake too.

He has three dogs - Yuki, a samoyed, nine, Baby, a shih tzu- poodle, eight, and Flo, a spitz, seven - which share his bed at his condo in Whampoa every night.

"My wake must be somewhere dog-friendly, such as an outdoor area. I also want an open casket, so my dogs can touch me and see me off."

His wife will dress him.

"She buys all my clothes and does an amazing job dressing me. I want her to do the same when I am dead.

"Even if she goes first, I would like her to pick my clothes before she goes," he adds with a laugh.

In his coffin, he wants to hold 12 black roses, an image that has captured his imagination.

"There's no real reason for this. It is just the way I have always pictured my funeral to be," he says.

After his cremation, he hopes his wife will take his ashes to Japan. He does not want her to be interviewed, but says she is aware of, and supports, his after-death plans.

So do his friends. His parents, however, do not know yet.

"My parents are very open- minded and I have nothing to hide. I guess I just haven't got around to telling them," he says.

"Maybe this article will do the trick."