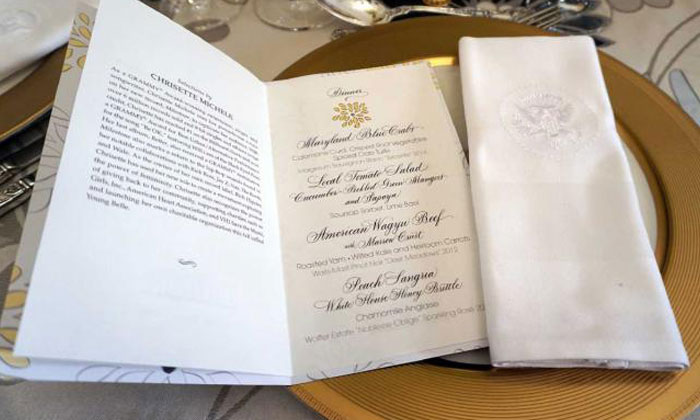 The dinner marks the first time in more than three decades that a Singapore prime minister has made an official visit to the US. The last such visit was made by founding Prime Minister Lee Kuan Yew in 1985, at the invitation of then-President Ronald Reagan and Mrs Reagan.

According to The Washington Post, guests at the dinner on Aug 2 will get to enjoy a first course of "cool crab salad garnished with a tuile made using powdered crab shells and Old Bay".

This will be followed by a salad made from heirloom tomatoes grown in Michelle Obama's garden on the grounds of the White House.

The salad will also include ingredients with an Asian slant, like green papaya, pickled green mangoes, accompanied by a soursop sorbet.

American wagyu beef has been set as the main course, which will be dressed with "roasted yams, wilted kale and heirloom carrots", noted The New York Times.

According to The Washington Post, the steak will be seared in Vermont butter and served with bone marrow "in the form of a light crust".

The New York Times added that for dessert, a peach sangria cake will be served, accented with coconut milk and kaffir lime leaves and drizzled with White House honey.

Another highlight would be the edible centerpieces at each table, made using caramelized almond nougat and pulled sugar flowers, which will hold one-bite pastries.

And what is dinner without entertainment?

As for the decor, the room will be dressed in yellow blooms - yellow orchids, roses and other yellow flowers, with the colour symbolising the friendship between the two countries.

PM Lee arrives in Washington on Sunday for the six-day official visit, which coincides with the 50th anniversary of diplomatic relations between the two countries.