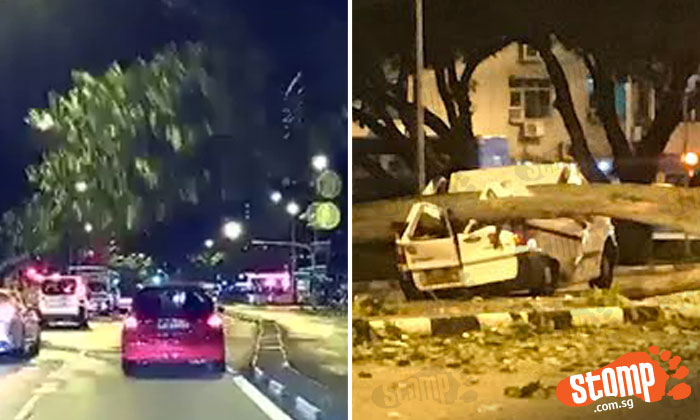 A huge tree fell on two vehicles along Upper Aljunied Road yesterday (Dec 13) at around 7.50pm

Stomper JoAnn alerted Stomp to photos and videos posted on Facebook by netizen Albert Liang showing parts of the tree falling on a moving car.

In the one of videos, a red car can be seen travelling in front of Albert's car on the right lane of the road.

The huge tree then fell on the moving vehicle. A part of the tree fell first on the car's bonnet while the remainder hit the roof of the vehicle moments later.

The car did not appear to be severely damaged as it was not directly hit by the tree trunk.

Stomper Bryan who also alerted Stomp to the incident sent photos showing a white-coloured van that was also involved in the incident.

Unlike the car, the van was crushed after the tree trunk fell on its rear.

SCDF personnel and Police were at the scene aiding recovery efforts and the area had been cordoned off.

Said an SCDF personnel with regard to what happened:

"SCDF were alerted to the incident at around 8.05pm and dispatched a fire engine to the scene.