How SR Nathan took charge of Laju hijack crisis in 1974 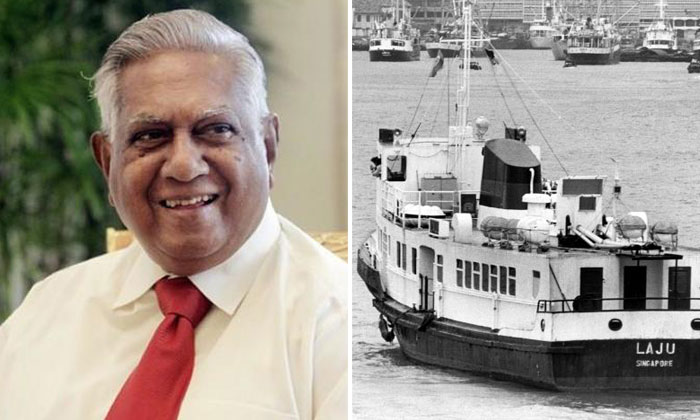 His first opportunity to work with former president S R Nathan was during a terrorist attack on Singapore in 1974.

It was a fiery initiation.

Former Commissioner of Police Tee Tua Ba, 74, was then 31 and the newly-appointed officer-in-charge of the Marine Police.

Mr Nathan was then the Director of Security and Intelligence Division. He died peacefully yesterday at Singapore General Hospital. He was 92.

"I was then a young commander, reporting directly to Mr Nathan, who had been assigned to take charge of the crisis at Marine Police Headquarters," Mr Tee told The New Paper.

The men were armed with sub-machine guns and explosives.

After they failed to blow up the oil tanks, the group - two members of the Popular Front for the Liberation of Palestine and two members of the Japanese Red Army - hijacked the Laju ferry at the Bukom jetty and held the crew hostage.

After several days of tense negotiations, involving the governments of Singapore and Japan, the hijackers agreed to release the hostages in exchange for a party of guarantors to ensure their safe passage out of the Republic.

Mr Nathan, then 49, led the 13 guarantors, which consisted of four commandos and eight other government officials, including Mr Tee.

The four terrorists boarded a specially-arranged Japan Airlines aircraft with the guarantors, and left for Kuwait.

"Mr Nathan was calm, cool and clear-headed throughout the crisis. He understood the dynamics of the crisis as it unfolded, as well as the demands and pressures confronting me as commander on the ground," he told TNP.

"A firm believer and practitioner of empowerment - especially when there were no precedents or guidelines - Mr Nathan did not micro-manage.

"Instead, he was an enlightened crisis leader and gave me a lot of leeway to take initiative and exercise judgment as the commander on the ground.

"He was always prepared to listen to views, to assessments and to recommendations before finalising any plan of action," Mr Tee added.

"Mr Nathan, I learnt later during the crisis, was assigned by the PMO (Prime Minister's Office) to take charge of the Laju hijacking and hostage situation.

"Yet, despite my young age and his seniority, he put me very much at ease when working throughout the crisis," Mr Tee said.

He also felt that apart from being an effective crisis leader, Mr Nathan was "a man of courage".

"He knew the ruthlessness and propensity of the terrorists...

"He was fully aware of the danger that would await us in Kuwait where we agreed to hand over the four terrorists to their comrades who had captured the Japanese Embassy and had held several officials hostage.

"Yet, he agreed to lead the Singapore team to ensure safe passage for the four surrendered terrorists.

"Again, upon landing in Kuwait, Mr Nathan used his wit and negotiation skills to convince the Kuwaiti authorities to let the Singapore team disembark safely and board another plane for their homeward journey."

Mr Tee got the opportunity to work with Mr Nathan again years later when he was made Chairman of Singapore Red Cross. As the President then, Mr Nathan was its patron.

"Mr Nathan was always very supportive and took a keen interest in all our charity activities and projects. At his age, it was amazing to witness the pace and intensity with which he drove himself in carrying out his Presidential duties," Mr Tee said.

1955: Worked as a medical social worker.

1956: Seamen's welfare officer at the Ministry of Labour.

1964: Director of Labour Research Unit. He was conferred the Public Service Star this year.

1974: Was among a group of government officers who volunteered to be held hostage by the Japanese Red Army and Popular Front for the Liberation of Palestine during the Laju incident to secure the release of civilian hostages. Awarded the Meritorious Service Medal this year.

1979: Returned to the Ministry of Foreign Affairs as its First Permanent Secretary.

1990: Singapore's Ambassador to the United States.

1994: Dealt with American diplomatic pressure over the caning of American citizen Michael Fay, who was convicted of vandalism in Singapore.

1996: Made Ambassador-at-Large and was concurrently director of the Institute of Defence and Strategic Studies (now known as the S. Rajaratnam School of International Studies) at the Nanyang Technological University. He was also the pro-chancellor of the National University of Singapore.

1999: Elected unopposed as President of Singapore.

2005: Re-elected unopposed as President of Singapore.

2013: Given the Order of Temasek (First Class), the highest civilian award.