Have you seen this lorry driver? Look what he did to my roller shutters while reversing 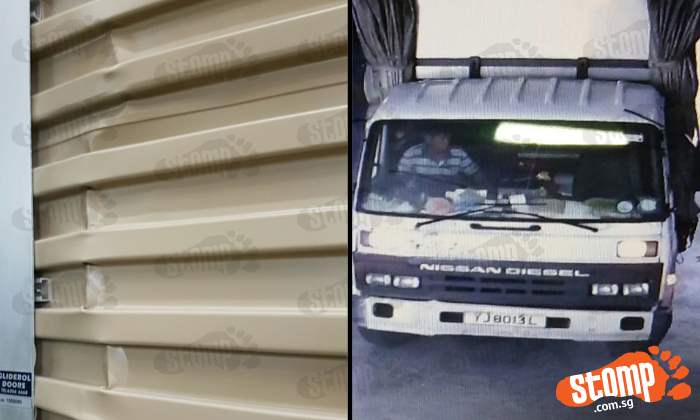 Stomper Lee's roller shutters were hit and eventually dented by a lorry at 15 Yishun Industrial Street 1 on a Monday afternoon (Oct 24).

According to the Stomper, the lorry driver had reversed and hit his roller shutters at 11.19am at Win5, a commercial property at Yishun.

"I was on my way to meet a property agent at the eighth floor. I drove to Win5 and parked my car there.

"After the meeting with the property agent, I came back to my car, and saw that the roller shutters were dented."

According to the Stomper, a day before, on a Sunday, he was present at Win5, and did not notice any damage on the roller shutters.

"Thus, on the day (Oct 24) of the incident itself, I immediately asked my neighbours there who have a closed-circuit television (CCTV) camera to help," Lee added.

After reviewing the CCTV footage, Lee noticed that no other foreign vehicles were present on Sunday, and Monday, before the "hit-and-run" incident occurred.

The Stomper then reported the incident to the police, and was advised to refer the case to the Traffic Police (TP).

"The TP did not follow up efficiently and asked that I find a lawyer or a management to claim insurance," said Lee.

"The TP said that the lorry is a privately owned vehicle, and does not belong to any company.

"However, they are not able to identify the driver. I hope to find a solution soon, as the replacement of the roller shutters can cost up to ten thousand Singapore dollars."