Guy's e-scooter towed after he rides across zebra crossing: He gets mocked for ranting about it online 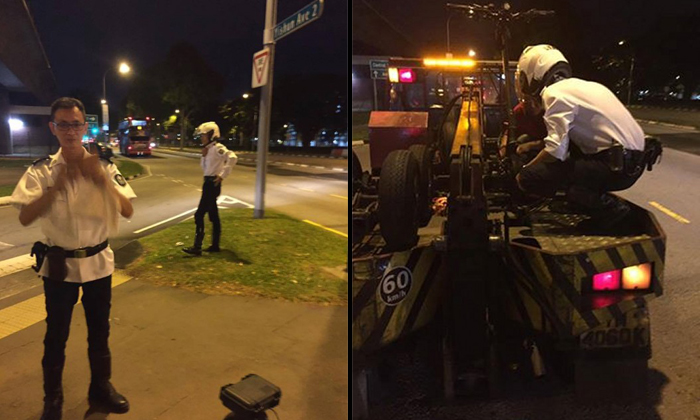 A guy's rant about his electric-scooter (e-scooter) getting towed by enforcement officers ended up backfiring on him after he got relentlessly mocked by netizens.

The rider posted photos and details about this incident on Roads.sg.

He detailed that his e-scooter was towed even though he was wearing a helmet and had his lights on.

He also posted two photos showing the enforcement officers talking to him, and towing his e-scooter.

However, another two images he posted show the police report he filed over the incident.

His statement shows that he cycled across the zebra crossing, which many netizens pointed out was wrong.

They highlighted that a rider has to dismount and push his vehicle across a zebra crossing.

The rider alleged that the officer told him that his e-scooter would be confiscated, and that he had to go to the LTA headquarters at Sin Ming to record a statement with the Investigating Officer (IO) in two hours.

He also mentioned that he went to the LTA headquarters at Sin Ming at 2am, and spoke to a security guard after realising that it was closed.

However, netizens mercilessly mocked him for showing up at an LTA office at 2am and expecting it to be open.

The rider also said that his e-scooter was towed away even though he did not sign the acknowledgment slip the officer gave to him.

Once again, netizens said that the officers could have confiscated his e-scooter despite whether he signs the form or not.

Related Stories
'Champion' e-scooter rider goes on 2nd lane of road, right next to bus
When 'wheel' they stop? E-scooter riders race down the road at 80km/h
More About:
e-scooter towed
e-scooter gets confiscated
e-scooter