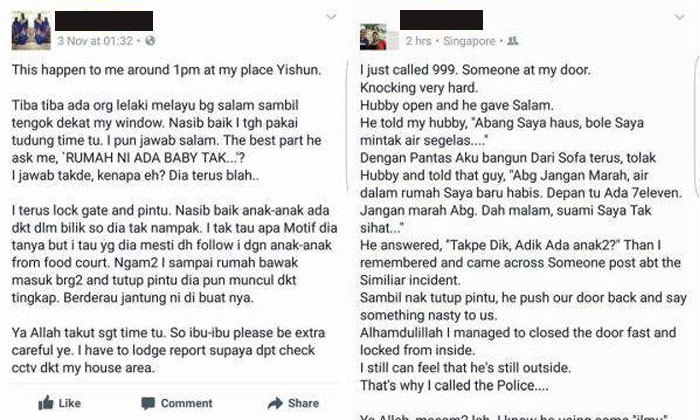 The Police have investigated into the case reported on 3 November 2016 where a man had loitered outside a HDB unit in Yishun and asked its owner if there were babies inside the unit.

Two people posted on Facebook about a man who knocked on their door and asked if they have children before running away.

The Police are still trying to establish the identity of the man.

There are no other reports made to the Police on similar incidents in other parts of Singapore.

One of them talked about how the man knocked on her door and said, "Peace be upon you."

He proceeded to ask her if she had any babies in the house and she replied, "No."

Thankfully for her, the man could not see her children who was in a room.

The woman does not know what his motive was but was sure that the man had followed her kids and her from a food court.

According to All Singapore Stuff, the man went to another house in Woodlands.

Only this time, the man asked the resident if he has any drinks to offer.

The resident happens to be a man and he seems confused.

His wife then stepped in and told the man who asked that they ran out of drinks.

She suggested that the man get a himself a drink from the 7-11 store.

The man assured her that it's fine and asked her if she have any children.

She recalled similar incidents she has heard about and went to shut the door.

According to her, the man said something nasty before the door was locked from the inside.

Both of them have reported the incident to the police.

Members of the public should refrain from speculating or spreading unsubstantiated information about the case which may generate unnecessary public alarm.

The Police advise members of the public to call "999" immediately if they see any persons behaving suspiciously in their neighbourhood.

Related Stories
Couple visits woman's Ang Mo Kio flat to do 'CPF survey' and asks for $7 -- then gives her used vouchers
When you see it: Nude guy spotted on bridge at Yishun Pond
Jobless man breaks into sister's house to steal $340,000 watches
What is he doing? Not the first time man seen standing on roof of Tree House condo and looking down
children
HDB
creepy
guy asks for children
Yishun
woodlands