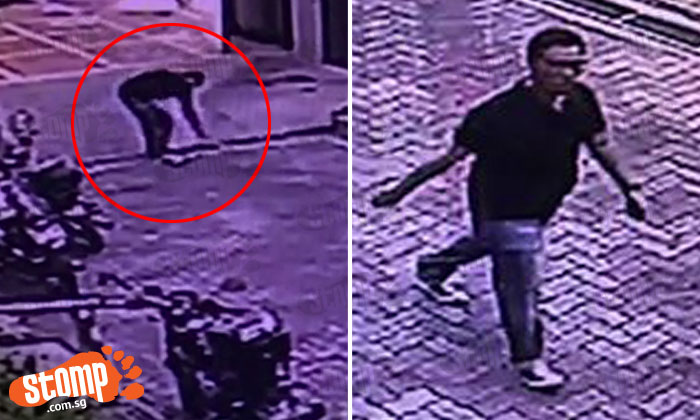 Stomper MJ dropped her Oppo R9 mobile phone at The Red Box in Somerset on Dec 16 at around 5pm as she was carrying bulky items to an event.

In a telephone interview, she told Stomp that her colleague then tried to call her phone in an attempt to locate it.

The call was answered, but the person on the line who allegedly picked up the Stomper's phone gave a less-than-heartening response.

Said the Stomper in an email and telephone interview:

"The person on the other line said 'erm... wrong number', then my phone was never on again.

"CCTV footage showed this guy appearing a couple of minutes after I left.

"He was looking around before picking up something like my phone at the entrance, started pressing it, checked out the CCTV, walked away and pressed the phone again only when he thought he was out of sight from the CCTV.

"Carelessness was my bad, but refusing to return the phone knowing the owner was in the vicinity was a real low.

"One of the times that I wished I were those who regularly post travel photos on FB, because there went my recent Japan photo (including my bf's proposal. ahhh.).

"One part of me wants to believe that he had some struggle when he chose to answer the call.

"Hope he can return the phone to The Red Box reception when he sees this if he does not have the courage to hand it to the police.

"Otherwise, I sure hope the power of the internet could encourage him to return it."

The Stomper has made a Police report over the loss of her phone.