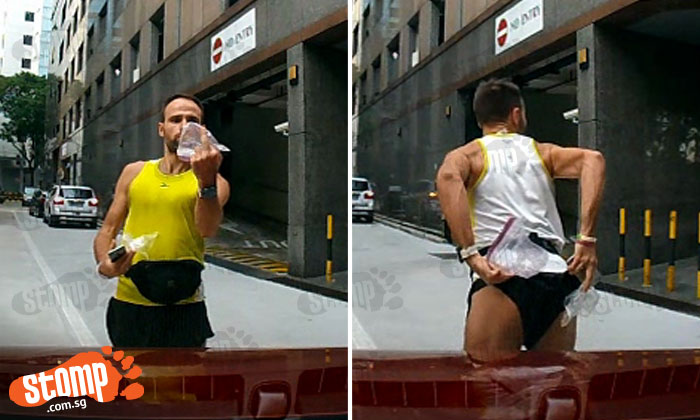 Stomper Kelly was driving along Keppel Road when she encountered an aggressive pedestrian who left her shaken.

She was turning into a side road when she saw the pedestrian crossing with his eyes on his phone.

She shortly honked at him to alert him of her approach but did not expect him to react the way that he did.

"I did a friendly honk to warn him of my approach but it was so friendly that it was barely audible.

"I did an e-brake and at the same time, honked a second time, this time a little louder but not prolonged or loud.

"This guy jumped and got very offended.

"He rudely stood in front of my vehicle, endangering his and my own safety.

"As if this was not sufficient to threaten me, he resorted to offensive acts including showing middle finger and baring his buttocks.

"A passer-by could not tolerate such obnoxious behaviour and came over to mediate the situation.

"I was tempted to get out of the car but I feared for my own safety.

"This guy could turn violent any time from the look of his fury.

"In fact, he was so furious that he had to turn around to challenge me one more time when I was explaining my situation to the passerby.

"I was in a state of shock and was too angry to think of what is the best way to deal with that situation.

"I feared mostly for what he could have done if I have gotten out of the car.

"I'm sharing now to caution ladies who might meet with similar incidents.

"Stay calm and ask passers-by to be your witnesses.

"Call the police if possible.

"I can't help to think that if it was a man sitting behind the wheel, this man might not have acted as aggressively or been as intimidating.

"His only excuse was that he did not like being honked at. Such a coward!"