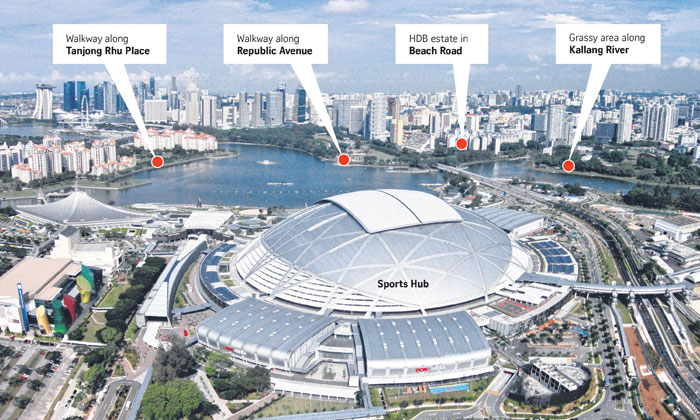 Parks, footpaths and Housing Board estates.

With the first of the National Day Parade previews to start tonight, professional photographers have shared secrets of some of their best vantage points from which to capture the best shots of the fireworks.

And with this year's parade taking place at the 55,000-seater National Stadium for the first time since it was rebuilt, there is a whole range of new angles to try out.

Pyrotechnics will be set off from the domed roof of the National Stadium and three barges on the nearby Kallang Basin, so nearby riverside locations - such as the walkways between Tanjong Rhu Place and Kallang Basin, and waterfront walkway along Republic Avenue - and residences will have the prime views.

The residential areas include the HDB estates in Pine Close or across the Rochor River in Beach Road.

He said the fireworks typically begin just past 8pm and advises taking along a tripod.

Mr Chan Kim Han, 47, a professional photographer who specialises in landscapes, said: "Fireworks are all about timing... Go and shoot during the trial run and you will be prepared on the actual day."

Full-time photographer Aram Pan, 40, said: "My advice as a photographer to other photographers: Don't forget your family, in the pursuit of that perfect shot.

"And don't be so caught up... that you miss out on the emotions and experience that make NDP so special."

Residents living around good vantage points do not seem fazed by the photographers who have shown up for firework rehearsals over the past few Saturdays.

Madam Lai Mee Lian, 73, who lives in an HDB flat in Beach Road, has seen her fair share of fireworks in the almost five decades of living there.

She said in Mandarin: "It seems like every year, there are a few occasions for fireworks. Every time I hear the sound of fireworks, I will go out to the corridor to check them out."

Ms Low Mun Peng, 80, who lives in an HDB flat in Kampong Kayu, said: "They would be snapping away with their big cameras and fancy equipment. I just try to stay indoors and out of their way."

The NDP previews will be held this evening and on July 30, ahead of the official parade on Aug 9.