Grab officially declares war on Uber with its own carpool option, GrabShare 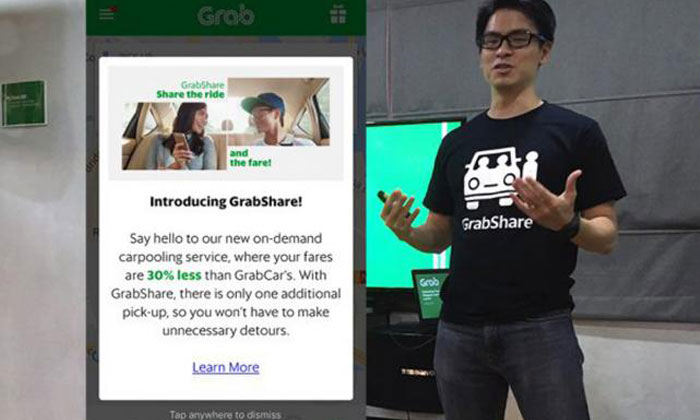 Coinciding with being in the Singapore market a little over three years since they first launched here, Grab has finally revealed their newest and much-awaited feature for their app.

Frequent users of the app may have noticed this little pop-up appearing in your notifications, or while using Grab this afternoon.

Currently still in a beta testing stage, the GrabShare feature on the Grab app was made live at noon today.

What this new option provides users is basically the option to hop into a commercial carpooling service from the app.

What GrabShare aims to do is to make carpooling more accessible, and affordable, to the masses.

At the core of this new service, passengers will still be able to enjoy the same standards and comfort they previously had when taking GrabCar Economy, just that now, it's cheaper and you can make a new friend along the way.

With the advent of carpooling in Singapore, Grab recognises that a common complaint among active users of carpooling services are the long detours, and having too many co-passengers in a single trip.

They hope to minimise this problem as much as possible through their matching algorithms that alleviates these problems, which have been developed in-house within their research and development facilities in Singapore, Seattle, and Beijing.

These are the folks responsible for developing ways to bring down your overall travelling time when taking GrabShare, and passengers should expect only an additional 20 per cent of travel time as compared to taking GrabCar Economy.

Wait, Don't They Already Have A Carpool Service?

The astute among you may have notice an overlap here for a moment.

Doesn't Grab already have a carpooling option in the form of GrabHitch?

Well yes, but there's a difference.

Here's a table to break down what areas both GrabShare and GrabHitch serve.

To describe it in a few words; GrabShare is an on-demand commercial carpooling service, while GrabHitch is a social carpooling experience by non-professional drivers.

Here's a summary on what GrabShare offers:

A Welcomed Addition To On-Demand Transportation

So to summarise, here's how a typical GrabShare trip will work:

Passenger A selects GrabShare ride and is picked up by a GrabShare driver.

Diver makes a slight detour to pick up Passenger B. Both Passenger A and B can bring one other person to ride with them (for example, four seats in the car may be filled).

The order of pick-up and drop-off ensures that both Passenger A and B get to their destinations quickly.

With GrabShare now out, it enters into a crowded market of on-demand ride services which includes the entire umbrella of Grab ride options (GrabTaxi and GrabCar), as well as those by rivals Uber.

Buoyed by the encouraging numbers that GrabHitch has garnered in the (close to a) year since that service was launched (there was a 75 per cent growth in the last 3 months alone), it is hoped that GrabShare will continue on the tradition and enjoy explosive growth in the coming months before going out of beta.