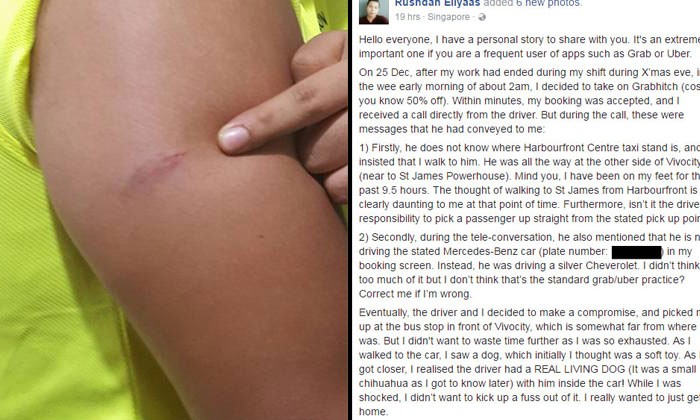 Rushdan booked a service home via GrabHitch two days ago (Dec 25) at around 2am and ended up home with a bite mark from a Chihuahua which cost him $117.40 worth of medical bill.

What makes matters worst was the treatment of the driver towards him which led him to share his story on his Facebook page.

He met the taxi driver at Harbourfront due to the driver not knowing where his original pick up destination was.

According to Rushdan, he has been standing for nine and a half hours during work that day and would not like to travel far just to get to the cab but he made a compromise.

As he arrived, he noticed that the car was a Chevrolet and not a Mercedes-Benz as was stated by the booking.

Nevertheless, it was the dog in the car which made him even more suspicious of the driver's practices.

He opened the door and was about to sit at the back of the car since the dog was at the front when the driver said,"Have you no shame? Are you not embarrassed?

"This is GrabHitch, not GrabCar, you know!"

Rushdan was appalled by his manner of speaking but went on to sit on the front seat.

View the gallery above for his full post which went on to describe the bad customer service he faced.

The driver went on to lecture him about 'hitch' culture and boasted about how drivers like him were "doing a service to the community by allowing people to sit in his car at a very small fee and helping people reach their destinations."

Rushdan asked if the dog was generally okay with strangers and as a reply, he got lashed at by the driver.

He neared his destination but just as he was about to alight, the dog bit him.

He had to get a tetanus shot as well as antibiotics which caused him a whole lot more than the $6 worth trip he had hoped for.

He has contacted the Agri-food and Veterinary Authority of Singapore which has received his feedback and will investigate the incident.

He has also made an official police report which the police have confirmed.