Goondu posts photos of burning Singapore flag on Instagram, challenges authorities to give him the death penalty 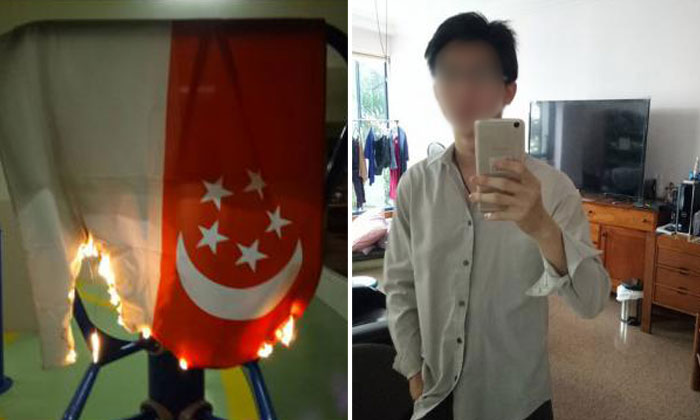 An Instagram user has incited the anger of netizens by posting photos of him allegedly burning the Singapore flag.

He uploaded two photos of a Singapore flag on fire and wrote on one post:

"They have to throw the death penalty on me if I keep doing this right?"

"I don't enjoy patriotism/this is an act of treason/will something happen yet?"

Singaporean netizens are furious where some have advised him to remove the photos to avoid getting into trouble with the law.

However, he remains unrepentant and told one netizen to "eat s**t and die".

Despite his apparent defiance, he has removed the posts of the Singapore flag in flames but has left his Instagram profile public so netizens are continuing to leave comments on his other posts.

Under the Singapore Arms and Flag and National Anthem Act, it is an offence to treat the flag with disrespect.

According to the National Heritage Board, the flag cannot be used:

No person shall produce or display any flag that bears any graphics or word superimposed on the design of the Flag.

The Flag should be cleaned when dirty, and replaced if it has faded.

After any washing, it should not be hung out to dry outdoors together with other laundry.

Any worn out or damaged Flag should be disposed of properly, and not left visible in dustbins.

Torn or worn-out Flags should be packed into a sealed black trash bag before being disposed of.