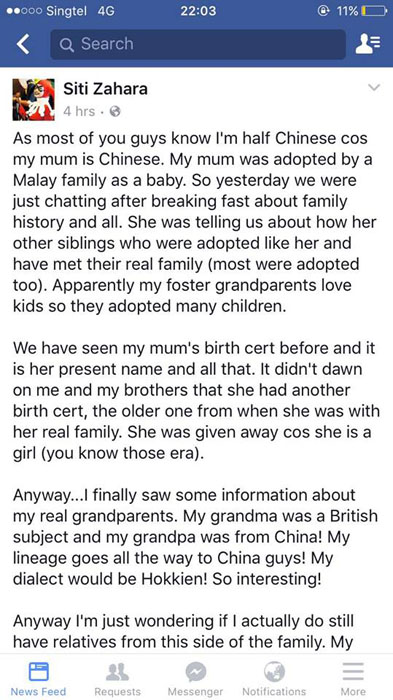 Stomper Madeline came across an unusual facebook post by a girl who wished to find her mother's biological family, hoped to help by sharing it.

The girl, Siti Zahara, said her mother was a Chinese woman who was adopted and raised by a Malay family.

She had been put up for adoption by her birth family as she was a girl, a practice that was followed in that era.

She had told her children, including Siti, that her adopted siblings had all found their birth families.

So, her children decided to look at her original birth certificate, and discovered that her mother was Singaporean listed as a British subject and her father was from China.

Both were listed as being part of the Hokkien dialect group, and 194 East Coast Road was stated as their address.

"Anyway, I'm just wondering if I actually do have relatives from this side of the family," said Siti.

"My grandma would be 83 though if she's still alive.

"It will be really cool to track down my mum's family.