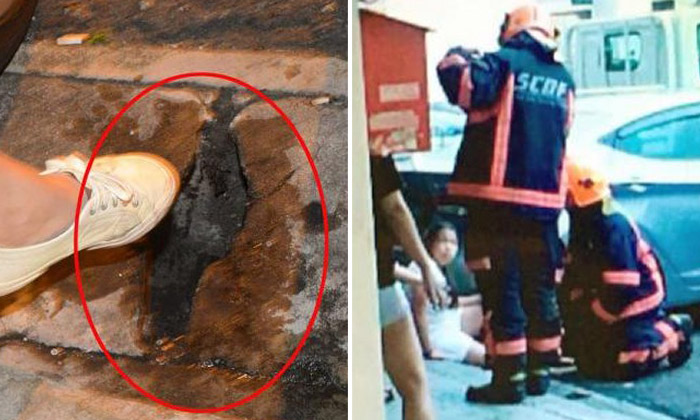 A girl was trapped for 40 minutes after her leg became stuck in a hole in a broken concrete slab on Thursday.

The family had just left Fatboy's The Burger Bar at Joo Chiat Road after dinner when the accident happened.

The 11-year-old girl and her younger brother was playing outside the restaurant when she stepped on a broken concrete slab covering a drain, causing her right leg to become tightly wedged in the hole.

A waitress from the restaurant told Chinese evening paper Shin Min Daily News that the family left at about 6.30pm and the incident happened not long after.

For the next 40 minutes, the girl's leg remained stuck as several people tried to free her.

Her father approached the restaurant for cooking oil, hoping to use it as a lubricant to dislodge his daughter's leg, but he was unable to.

Throughout the ordeal, the girl did not cry, the waitress said.

A spokesman for SCDF said they received a call at about 6.45pm and sent a fire engine, a Red Rhino, two fire bikes and an ambulance to the scene.

The girl suffered minor abrasions on her leg and was taken by ambulance to KK Women's and Children's Hospital.