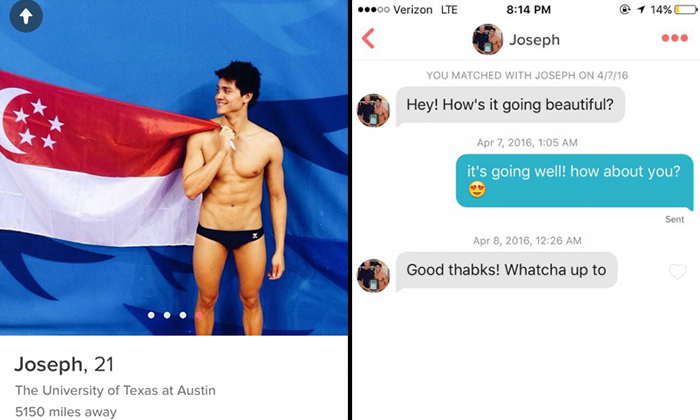 A girl posted screenshots of her Tinder conversation with Joseph Schooling after ignoring him for almost four months, then realising that he won an Olympic gold medal.

The girl's post has gone viral as Schooling's accomplishment of winning Singapore's first Olympic gold medal and beating Michael Phelps has taken the world by storm.

According to the screenshot Twitter user @sabwow posted, it appears that Schooling matched with her profile on April 7, and subsequently messaged her on the app.

She replied to his initial greeting, so he responded the next day.

However, she did not respond to his subsequent message, and the chat seemed to have died an early death at that point.

Until today, that is.

Because today she realised that guy she matched on Tinder had smashed an Olympic record and beat three other swimming titans to take the gold medal.

Netizens could not help but mock her for 'missing the boat'. We can't help but agree.

Although it is sad to realise that an Olympic medalist got ignored by a girl, just like any other guy.