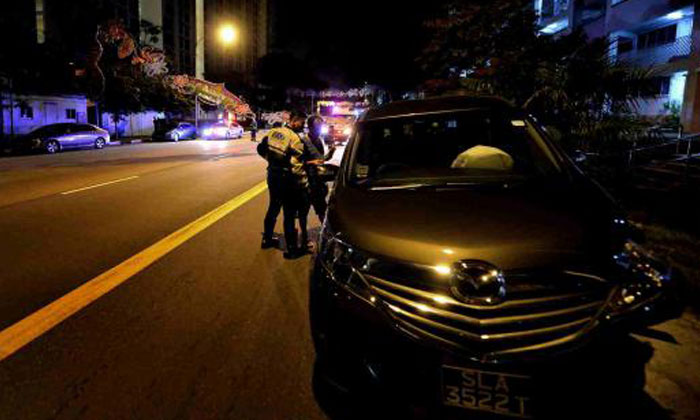 It was a car crash in the dead of night. But it still brought together some residents of Geylang Serai.

Mr Muhamad Rizal, 21, was hanging out with his friend near Block 414, Eunos Road 5, yesterday when he heard a crash at 3am.

A Mazda Biante multi-purpose vehicle had swerved into the left lane to Sims Avenue and hit a counterweight supporting an overhead Hari Raya decorative banner.

The left side of the vehicle was damaged.

Mr Rizal and his friend rushed towards the sound, ready to help any injured victims.

"I have a medic background as I was trained in the army," said Mr Rizal, a helper at Seah Im Food Centre.

"It was a shocking moment. I thought someone might have been injured," he said.

Fortunately, the car driver appeared unhurt and told Mr Rizal he was fine.

A police spokesman said a 59-year-old man was arrested on suspicion of drink driving.

Under the law, first-time offenders face disqualification from driving for at least a year and a maximum fine of $5,000 or six months' jail.

The sound also surprised Ms Nur Aisah, 21, who was at home at Block 414, putting up Hari Raya decorations with her family.

"I started shivering when I heard the noise," said Ms Nur Aisah, who ran to the scene with her cousin.

"We wanted to help in case (the driver) was injured," she said.

The cousins were joined by Mr Ridwan Iskander and his friend Mohd Riduan,who were also alerted by the sound of the crash.

"We just tried to guide the oncoming cars away from the crash," said Mr Ridwan.

The banner had drooped to the left, obstructing traffic.

The Singapore Civil Defence Force (SCDF) sent a fire engine, a Red Rhino and an ambulance to the scene. Firefighters removed the dangling banner.

An SCDF spokesman said the driver was assessed by paramedics and declined to be taken to the hospital.