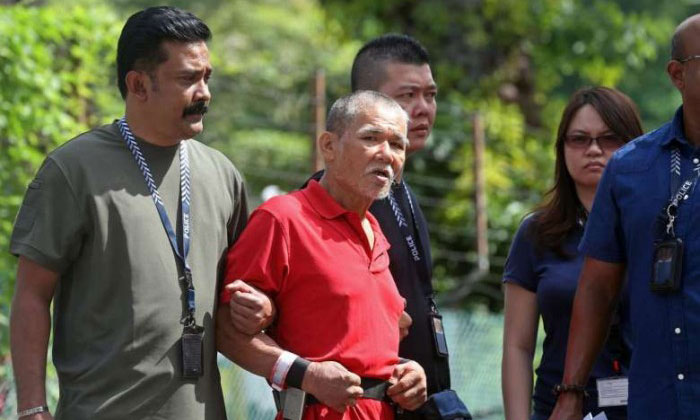 The 64-year-old suspect who was arrested in relation to a murder case at Lorong 23, Geylang was taken by police investigators to several locations in the area this morning (July 27).

A Stomper had shared photos of the incident on Jul 9, showing the victim lying bloodied on the road.

The victim was a 52-year-old man named Goh Eng Thiam, a former helper at the 'zi char' stall in the coffee shop nearby.

He was found dead near Victoria Food Court after allegedly getting into a dispute with someone.

The dead man had a deep cut from the left side of his ear to the top of his head, and a wooden stick was found nearby, reports said.

The suspect has been identified as Toh Sia Guan.

According to The Straits Times, Toh showed little emotion as he walked down Geylang Lorong 23 with two plainclothes police officers.

He did not seem to be affected by the crowd of some 40 onlookers who had gathered at the scene.

He paused to gesture at several locations including one where he and the victim were standing before they fought.

Police investigators were also seen noting down the escape route that Toh had allegedly taken after committing the crime.

He was also taken to a hardware shop called Budget Value at Lorong 25 where he is believed to have bought the murder weapon.

He pointed to a basket of fruit knives stored on the lower shelf.

Each knife was priced at $2.90 and had blades that were about 15cm long.

He also showed them where he bought a pair of yellow slippers ($4.90) that were found near the scene of the crime.

He led the investigators to a green trash bin on Lorong 17 where he had supposedly thrown his clothes away.

He allegedly ran 1km to Lorong 3 after that.

Toh's case is due to be mentioned this Friday (July 29) and if convicted of murder, he faces the death penalty.