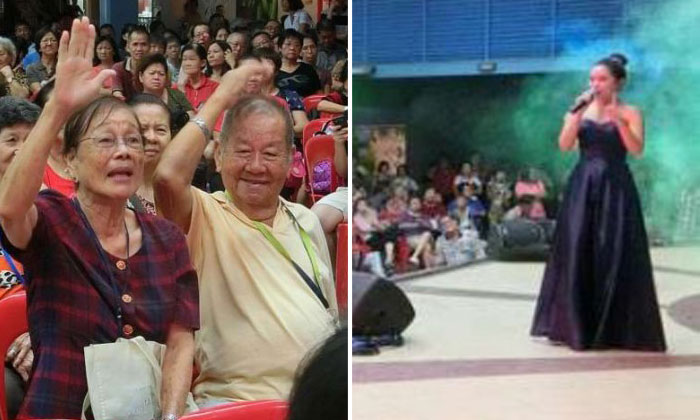 Getai performances here are now being used to aid in the fight against elder abuse.

In between songs, emcees tell seniors in the audience to break the silence on abuse, giving out goodie bags with a helpline number.

Earlier this year, the Centre for Promoting Alternatives to Violence (Pave) embarked on the pilot project in Yio Chu Kang to help ensure seniors there know what to do if they are facing abuse.

It is a creative way of reaching out to an at-risk group."For children, you have childcare centres where abuse can be seen and picked up," said Pave executive director Sudha Nair. "But the elderly have no one."

The centre, which largely handles cases of spousal violence, shared its latest statistics on abuse at a seminar yesterday which was attended by social workers as well as representatives from the Ministry of Social and Family Development and the Family Justice Courts.

Between 2011 and last year, Pave encountered 39 cases of elder abuse of victims over the age of 65. And in the last two years, it found 39 cases of children abusing parents under 65. In both groups, most of the victims were single mothers who were abused by their sons.

Most of the abusers were single, living with their parents, and dependent on them financially. They were also suspected of or diagnosed as having mental health issues.

Principal social worker Adisti Jalani recounted the case of a 72-year-old woman whose unemployed oldest son moved in with her after his divorce.

He relied on her for money, and even convinced her to transfer ownership of her flat to him. After moving in, he stored newspapers in her room and hurled vulgarities at her when she told him to remove them.

Once, the man pushed her so hard she ended up in hospital. Pave was then informed of the incident."There is an added layer of shame and self-blame that can prevent them from seeking help - they think maybe they haven't been a good parent," Ms Adisti said. "The elderly are hidden in their homes, and if we don't see them it's hard for us to know what is happening."

To help bring more cases to light, Pave has also been working with Pioneer Generation Ambassadors to pick up on signs of abuse during their house visits and report them.

Dr Nair said: "These ambassadors are seen as non-threatening, and that's how they can help."

If you know someone who needs help, you can call the Ministry of Social and Family Development on 1800-222-0000.

You can also go to www.stopfamilyviolence.sg to learn how to cope with abuse in your family.