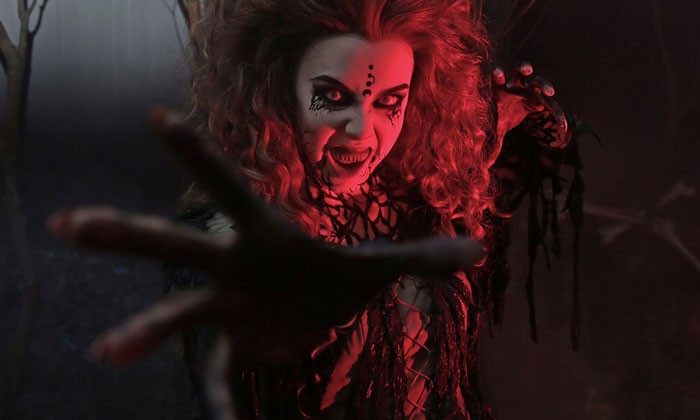 Witches, zombies, vampires, were-wolves and ghastly ghouls of all forms and shapes.

That's what most people have come to think of Halloween-themed haunted houses, each promising a heart-stopping boost of adrenaline for those with enough courage to enter its doors.

But Universal Studios Singapore, which recently launched the sixth instalment of its Halloween Horror Nights theme park in the lead up to Halloween which falls on Oct 31, takes their scare to the next level.

No expense and expertise seem to be spared in creating five haunted houses, each with a nightmarish scenario in environments where most people are either accustomed to, or read about in history books.

For example, there is the Old Changi Hospital haunted house, another haunted house fashioned after an old Chinese inn and even one transformed into a hawker centre. No prizes for guessing what lurks within.

But if visually-arresting scenes aren't enough to up the ante in terms of realism, the organisers even ensured that visitors get a whiff of realistic smells when entering a hospital or passing by a pile of human bodies, for instance.

That's exactly what a colleague and I experienced on Monday (Sept 26)  night when we boldly mustered the courage and agreed to subject ourselves to the mercy of whatever lay waiting for us within each haunted house.

We first entered the Salem Witch House - one of the five haunted houses I spoke of earlier - and we were met with two "possessed" female characters.

They held hands and knelt on the floor while groaning softly in pain.

Somehow in your head, you know that everything before you isn't real and it's all part of the show by scare actors. But you just can't help by feel the tiny hairs on your neck slowly start to stand with each step forward.

It seemed that every corner we took in this house made us feel like we were trapped and it was even harder to escape.

If we thought that was scary, we had no idea what was waiting for us at Hawker Centre Massacre next.

My colleague Cindy was close to throwing up solely at the rank smell of rotting flesh which lingered throughout the house. We didn't bring any barf bags either.

Within, elderly patrons were covered in blood and there was a wet market with rotten groceries and filthy toilet cubicles. Oh, and if that wasn't bad enough, there were zombies wandering around too

The zombies didn't quite scare me as all they shouted was: "Help me!" Maybe I should have led them out of the house instead - purely out of the goodness of my heart.

The ones which did get to me were the quiet ones who sat by themselves in the corner, gesturing wildly, oblivious to their surroundings.

My partner and I also had the opportunity to go to areas known as "scare zones" which had their own themes such as the Suicide Forest, based on an actual location in Japan, as well as the March of the Dead, based on the annual Mexican Day of the Dead festival. These zones are a perfect place to take selfies and cool off from the jolts of the haunted houses.

Call me a Halloween noob but this was my first time in a haunted house and what a trip it was. I was truly amazed at the dazzling costumes and lights, shocking jump scares and heart-thumping visuals.

Next time, I'll remember to bring a barf bag.

For more information, go to www.halloweenhorrornights.com.sg.

Related Stories
Now 7th month, please don't scare people like that
S'pore guy has got the 'third eye' and sees the things you will never want to
Creepiest video ever shows how dolls are made
More About:
scary
ghost
ghostly