Funny or just a nuisance? 'Clown' scares people in S'pore as Halloween prank 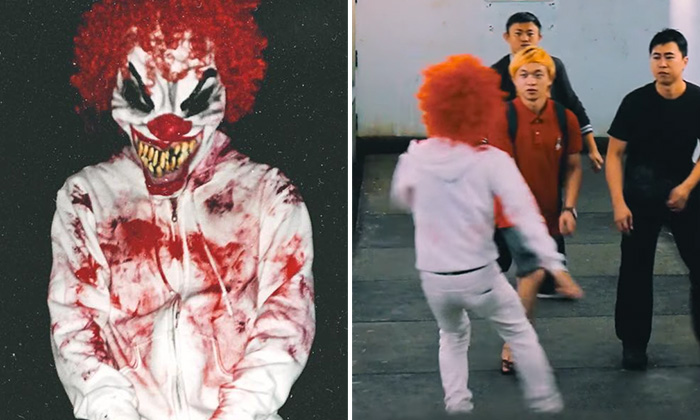 Halloween is not just a time for candy, it is also a time for pulling a good scare.

In the light of Halloween, one local YouTuber decided to dress up as a killer clown and scare some unsuspecting Singaporeans.

The killer clown, Joel Wong, who goes by the YouTube username of 'joelferdon', sent in his prank video to the Stomp Team and recounted his experience.

"It took us three days to film this prank video. We filmed on Wednesday, Friday and Saturday night. It all started on a Wednesday night.

"My first stop was East Coast Park. Surprisingly, the people there were not amused or scared, and had pretty boring reactions."

Joel then went on to say that he almost got himself in hot water.

"I scared this man and he shouted at me. That was when I quickly took off my mask and told him that it was just a prank. He laughed it off and we shook hands," Joel added.

The YouTube video was uploaded yesterday (Oct 30) and has since garnered over a thousand views.

In the video, Joel is seen hiding in between bushes and behind a wall before launching out to give his victims a scare.

Fellow Stomper Khaing happened to chance upon the video and shared it with the Stomp Team, saying:

"Check out this video before it goes viral! Also, I heard that the police was called in."

According to Joel, last Saturday night, a couple who was watching the filming of the prank called the police.

"The police came and told us that what we were doing is an arrestable offence. They took down our IDs and advised us not to upload any content regarding the prank."

Do you think the prank is funny or simply a public nuisance? Watch the video below and let us know what you think in the comments section.