Former Vietnamese refugee meets one of her rescuers 36 years later 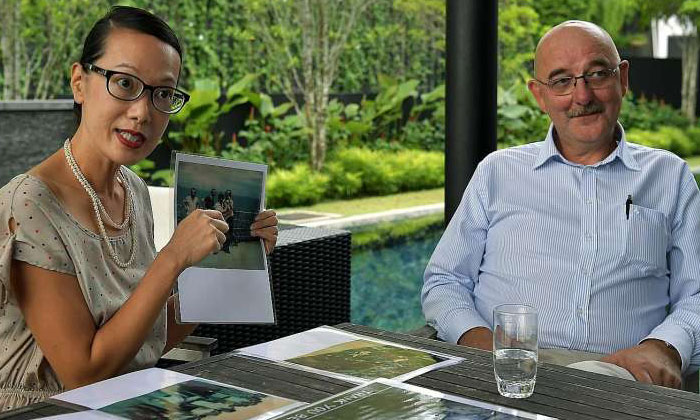 They were armed with placards, waiting to welcome a Norwegian man whom she had met only once, 36 years ago.

It was an encounter she would never forget.

When she was just four years old in October 1980, she was one of hundreds of thousands of refugees who fled in boats across the South China Sea after South Vietnam fell to the communists in 1975.

Adrift and on the verge of death while crowded with 81 others in a flimsy boat, a Norwegian oil tanker by the name of Berge Tasta came to their rescue.

The ship's crew of 29, which included 18-year-old Mr Bernhard Oyangen, fed and clothed them and eventually found a temporary refuge for them - the Hawkins Road Refugee Camp in Sembawang.

It was the first and only refugee camp here until 1996, when the United Nations High Commissioner for Refugees decided to shut all its camps in the region.

When 54-year-old Mr Oyangen entered the arrival hall, Ms Siow, 39, wrapped him in a long hug and introduced her three children, aged between five and 10.

"I said to him, 'Mr Bernhard, these are my children, and without your team and your captain, they wouldn't be around today'," recalled Ms Siow.

She resettled in Australia after her four-month stay in the refugee camp, and relocated here last year with her Singaporean husband.

In August, she decided to track down her Norwegian rescuers and contacted Mr Oyangen through Facebook.

They arranged to meet this month when he was due to pass through Singapore on a business trip to New Zealand.

Over breakfast at the airport, she found out other details of their 10-day journey at sea - why and how the crew had willingly taken in a group of refugees with an "indescribable" stench and given them the clothes off their back.

"It was wonderful to hear simple replies like, 'You're humans. We're people. We would save you no matter what'," said Ms Siow.

"The profound kindness of his actions really hit me when I met him and heard those words from him."

She has found four other crew members since August, and hopes to travel with her family to Norway to meet them in December.

Mr Oyangen, who owns a business in the shipping industry, was surprised when Ms Siow contacted him out of the blue.

The last time that he had met former refugees from the camp was about 15 years ago in Norway.

"Helping people at sea is a part of seamanship," he said. "I was happy to meet her and hear her story.

The Vietnamese people didn't talk much (about their history), but I know a lot more today after meeting her."

Mr Oyangen will be in Singapore until Tuesday, and has been spending time with Ms Siow and her family, visiting landmarks and having meals together.

Next Sunday, Mr Oyangen will visit Singapore on the way back to Norway, in time to celebrate Ms Siow's birthday on Oct 30, and mark the 36th anniversary of the arrival of the tanker in Singapore.

It brings a sense of closure for Ms Siow. "(It was very) important for me to put the story together so I can teach my children the importance of the kindness of strangers, the value of human life and how we treat each other... It affects people for the rest of their lives."

Related Stories
Japanese businessman reunites with Singapore girl whom he had a 40-year crush on
Kind family helps woman whose cab ran out of petrol on her way to visit mum at A&E
Good Samaritans who stopped to help me after accident at Lornie Road: If you see this, thank you!
More About:
war
heartwarming
online
kind-hearted
gratitude