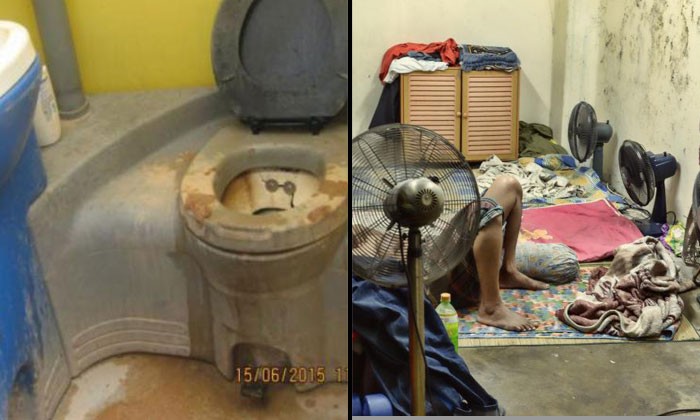 For housing their foreign workers in unapproved accommodation, two construction companies have been barred from hiring new ones and from renewing the work passes of their existing employees.

Between January and June last year, B-Construction had housed its foreign workers and those from the other company in cramped containers and make-shift zinc huts at a temporary workers' quarters in Canberra Crescent.

B-Construction failed to obtain the necessary approvals and endorsements to house the 26 workers despite knowing they were required, the Ministry of Manpower (MOM) said in a statement today (Dec 1).

"The sanitary facilities were inadequate. Apart from the three poorly maintained portable toilets, there were no proper toilets or shower areas. The workers had to shower in the open-air wash areas using hoses," the ministry added.

All workers involved have been relocated to other accommodation.

B-Construction pleaded guilty to 11 charges under the Employment of Foreign Manpower Act in the State Courts today, and was fined $74,000. Another 15 charges were taken into consideration for the purposes of sentencing.

This is not the first time this year that a construction company has been punished for housing foreign workers in unsatisfactory living conditions.

3S Solid Surface and Sing Solid Surface were fined a total of $180,000 in March for housing their foreign workers in a factory premises with hazardous living conditions, and for making false declarations in the Online Foreign Worker Accommodation System.

In May, dormitory operator KT Mesdorm was fined $300,000 for housing workers in overcrowded premises.

The MOM took action against 2,300 employers last year and 1,400 in 2014 for housing their foreign workers in unapproved premises.