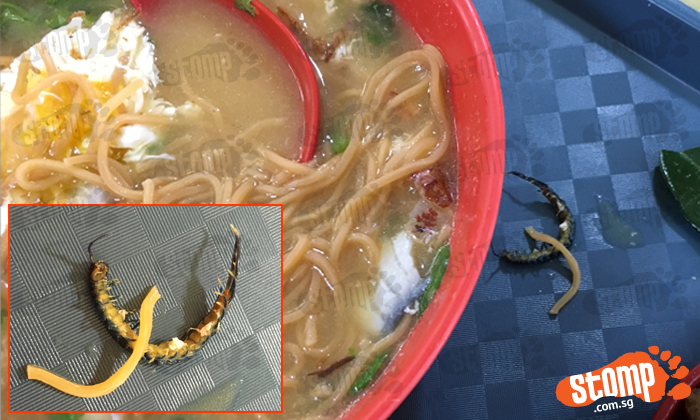 Stomper C was disgusted after finding what appeared to be a centipede in her fish soup noodles from a stall in Toa Payoh yesterday (Sep 7).

However, the stall owners told her that it was a vegetable worm and not a centipede.

They were also very apologetic and gave her a full refund of $6, as well as replaced her bowl of noodles.

"I had taken a few mouthfuls of the fish soup noodles when I noticed something black on a piece of vegetable. It looked like a centipede and was quite big

"I instantly lost my appetite and felt like vomiting, especially when I saw all the spindly legs and feelers. Freaking disgusting.

"Told the stall owners and they were quite shocked too.

"Be careful when you are eating anything with leafy vegetables in case there is a 'Caterpie' lurking inside!"

C declined to name the stall as she felt that the owners handled the situation appropriately and it was not really their fault. However, she would like to remind everyone to be more cautious when eating anything with leafy vegetables in particular.

Only recently on Sep 5, a man found a rat in his mutton soup from a stall in Jalan Besar. Photos showing the dead creature and his meal went viral after a Stomp report, and the incident is currently being investigated by the National Environment Agency (NEA).

Related Stories
Sorry in advance if you're going to throw up after seeing what diner found in his wanton mee
Yikes! Nobody likes a 'Rattata' -- especially not in mutton soup from Jalan Besar stall
Stomper spits out 'snail' while having laksa at Potong Pasir coffeeshop
Yikes, this is not a 'sour plum' in his juice as a Stomper originally thought
More About:
food
disgusting
unhygienic
insect