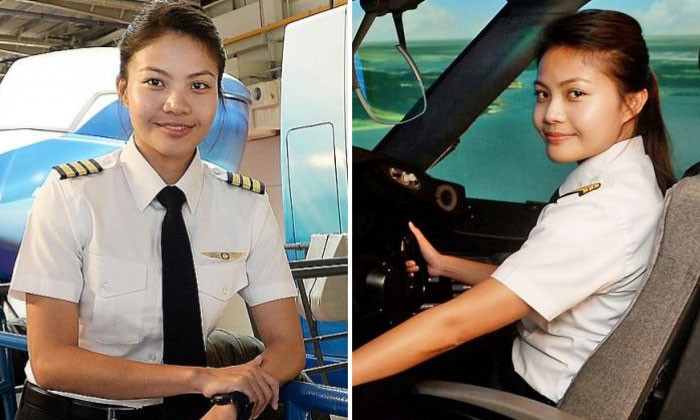 Two decades ago, a Primary Two student from Telok Kurau Primary School was fascinated every time a plane soared into the sky.

According to Berita Harian, even though she is the First Officer in Scoot-Tigerair, she is still in awe whenever she is in the air.

"I am impressed with nature's beauty, the colours of the skies changes when night turns to day, everything changes.

"I feel like I can never get bored with the experience and the emotions," said Miss Farhain, who joined Scoot-Tigerair last year and gone through training for ten months.

She added, "To be a pilot has always been my dream since I was in primary school.

"When I am in the cockpit and every button and equipment are at the tips of my fingers, I feel at ease."

Miss Farhain accompanies a captain and flies a Boeing 787 Dreamliner airplane which holds up to 300 passengers.

The furthest destination that she has gone to is Jeddah, Arab Saudi, a flight which took nine hours to complete from Singapore.

However, her adventures as a pilot takes more than just a few hours.

Her job entails being apart from her family, sometimes for fifteen days in a month.

However, Miss Farhain, who is the fourth child out of five siblings says she has been getting support from her family members.

Anyway, she will be wasting time if she is not working as she is still not married.

After graduating from Tanjong Katong Secondary School, she has been pursuing Biomedical Science in Singapore Polytechnic, but her passion was to always have a career in the air.

She got her Purdue Pilots Incorporated from Singapore Youth Flying Club in 2004 before entering a Singapore Flying College (SFC) program in 2007.

After a year, she got her Commercial Pilot License and got to be a practitioner.

She has six years of experience as a practitioner in SFC, training new pilots, including some who has become her colleagues.

Even though she loved her job in SFC becoming a full-time pilot was still tempting and she became Scoot-Tigerair's Second Officer.

She got promoted to First Officer after having completed 1,900 hours of flight.

Her next goal is to be a captain which would need 5,000 hours in air.

Besides exercising, yoga being her favourite form of exercise, she is also learning how to play the violin.

"The sea of knowledge is vast but we can only handle a handful so. If it's possible, I want to learn for my whole life," said Miss Farhain.