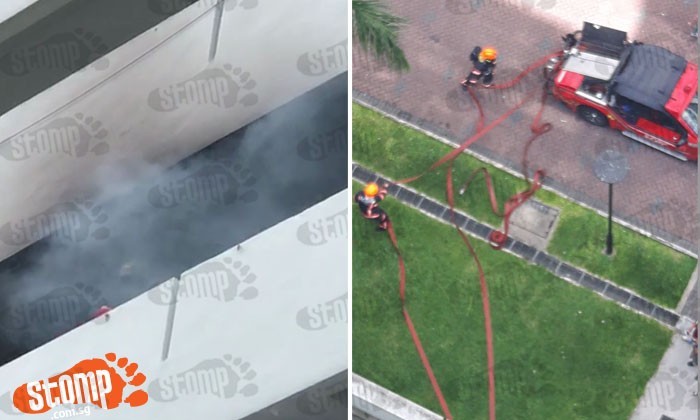 A man who was in a unit which caught on fire at Block 805 in King George's Avenue this afternoon (Dec 14) at around 1.20pm suffered burn injuries and has been conveyed to Singapore General Hospital.

Stomper Gilbert was working when he noticed smoke coming out from the building mentioned from his office building which was just next to it and Stomper Muzammil lives in the 13th floor of the block.

He was one of the few who alerted Singapore Civil Defence Force and the police regarding the incident.

According to the Stomper, the smoke was coming from the ninth floor of the building.

He mentioned that the SCDF was already present at the location.

He said, "They extinguished it quite fast."

SCDF has confirmed that they were alerted to the fire at around 1.20pm.

The fire involved contents of a living room and was extinguished by the SCDF using compressed air foam and one water jet.

SCDF personnel rescued a Chinese man in his 20s from the unit who was subsequently conveyed to Singapore General Hospital for burnt injuries.

1.    Never leave cooking unattended as it can result in fires; turn off the gas supply and cooking appliances whenever they are not in use.

3.    Always switch off appliances when they are not in use.

4.    Check the appliance for frayed wires or cracked cords, where if observed, the appliances should be replaced or repaired.

5.    Use only appliances and electrical plugs bearing the SAFETY mark.

6.     Do not place window curtains or any combustible materials near praying altars, stoves or lighted materials.

7.     Do not leave decorative lighting fixtures switched-on when leaving home or when going to bed. Lighting fixtures rated for indoor use should not be used in outdoor areas.

8.     Lit candles should be placed in stable holders on a heat-resistant surface. Lit candles should also be kept away from combustibles such as Christmas trees, paper or cardboard decorations, dry foliage, curtains and furnishings. It is also not advisable to leave candles burning in a room unattended.