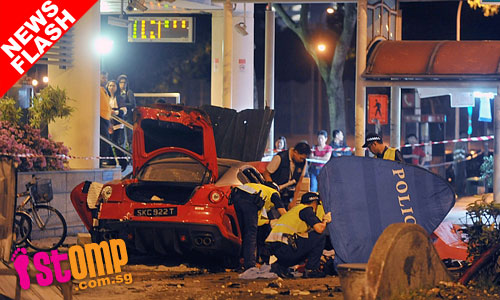 Before daybreak on Saturday morning, a Ferrari, a taxi and a motorcycle were involved in an accident at the junction of Rochor Road and Victoria Street, in the Bugis area.

Eyewitnesses said the Ferrari crashed into the taxi when it ran a red light, causing the taxi to hit a passing motorcycle.

The impact was so great, that reports said the taxi's engine was found 30m away from the taxi.

Over the past 12 days, there were six accidents said to have occured at the same location.

Police and the Singapore Civil Defence Force (SCDF) said they received calls at 4.15am on Saturday, May 12.

Both the Ferrari driver and the taxi driver were found trapped in their vehicles.

The Ferrari driver was pronounced dead at the scene by paramedics.

A woman in her 20s, who was the passenger in the taxi, was found unconscious and sent to the Singapore General Hospital (SGH).

She died on Saturday morning.

The three injured include the taxi driver, in his 40s, and the female passenger in the Ferrari, in her 20s, who both sustained head injuries.

The motorcyclist, in his 20s, sustained, spinal injuries.

They were sent to Tan Tock Seng Hospital.

Police investigations are ongoing and are appealing for eye-witnesses to call its hotline at Police 1800-5471818.