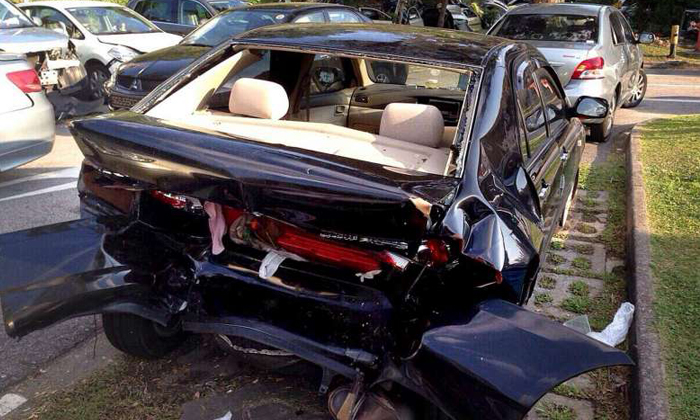 From a healthy five-year-old boy who could run and jump, he is now paralysed on the right side of his body, and cannot walk, talk, sit up, or even turn himself in bed.

All because of a driver who slammed into his family's car while tailgating them.

The boy's father told The New Paper he was livid the driver was not jailed, especially after the suffering he had inflicted.

The car, which was driven by his father, surged forward and hit another car.

On Monday, Lai was fined the maximum $5,000 and banned from driving for three years for negligently causing grievous hurt to the boy.

On Tuesday, the boy's father, 47, whom we shall call Bernard, told TNP how the accident had turned his family's lives upside down.

We are not naming the family to protect the boy's identity.

He said his wife, now 47, and son, now seven, were in the back seat while his mother-in-law was in the front passenger seat.

They were going back to their MacPherson Housing Board home after a meal in Woodlands.

As traffic on the SLE was relatively heavy, Bernard said he switched to the rightmost lane.

Traffic then slowed to a stop, and Bernard said he applied the brakes.

He said: "That was when there was a loud crash at the back of my car. The impact sent my car swerving to the right and scraping against the railing.

"All I could do was grip my steering wheel and hope we would be safe."

Bernard said the boot of his car was almost completely crushed from the impact. His son was in a daze and crying.

"My son's eyelids were fluttering and his eyes rolled backwards. His mouth was also bleeding and he lost a tooth.

"I immediately did CPR (cardiopulmonary resuscitation) while telling him not to sleep and to hang on," he said, choking up.

He was transferred to the KK Women's and Children's Hospital (KKH) that day and was kept in the intensive care unit for 13 days. Bernard said he and his wife did not go home during that period.

"We tried to stay positive even though there were so many tubes sticking out of him due to infection in his lungs and stomach," he said.

Bernard's son was later transferred to a high dependency ward and was warded for 100 days from June 11 to Sept 19.

Lai's lawyer had said in mitigation the boy was not wearing a seat belt.

The statement of facts did not state whether he was belted up.

But Bernard told TNP his entire family was wearing seat belts. "I will never drive off until all of us are belted up".

Court papers said his son could walk only with difficulty for the rest of his life.

Said Bernard: "Before the accident, my son was a very active boy who could run, jump and play like any normal child.

"Now he has to wear diapers and is considered bedridden. It's just painful to see him like this.

"My wife and I quit our jobs so we can care for him and we've almost depleted our savings on medical bills.

"Because of the driver, my family's happiness is ruined, and we don't know how long it'll take for my son to recover."

His son attends physiotherapy once a month and goes for acupuncture sessions.

"My wife cries every time she sees him pricked with needles, but we are trying every treatment to get him better," he said.

"But even with a seat belt, it's not a 100 per cent that you would not suffer injuries. It depends on the individual, the age of the person and the force of the impact," he said.

Bernard was shocked at Lai's sentence after TNP contacted him on Monday night.

"Why is the sentence so light?

"We (my family) are very disappointed.

"All we hope for is justice and fair retribution for what he did to my son, so we can give him an answer about the person who did this to him," he said.

Criminal lawyers, however, told TNP the sentence was fair.

Bernard thanked the medical team, particularly Dr David Low of KKH, and the ambulance staff for saving his son's life.

He added: "We just hope our case will remind other drivers not to tailgate because you never know if there's a child or old person in car in front of you.

LAWYERS: SENTENCE FOR DRIVER IS FAIR

The delivery driver who crashed into the back of another car and caused a five-year-old boy to be partially paralysed was sentenced fairly, criminal lawyers told The New Paper.

"This is a lower limb (of Section 338 of the Penal Code). Had he been charged with rash driving, the sentence could have been stiffer," she said.

She had previously told TNP that drivers charged with rash acts could be those who deliberately ignore red traffic lights or drive against the flow of traffic.

She added: "Drivers who commit negligent acts could be those who are not careful when making turns or fail to keep a proper lookout."

Hilborne Law director Rajan Supramaniam, who has been in practice for more than 15 years, also said the sentence was fair.

"From past cases, an accused who negligently caused grievous hurt is usually given a fine.

"Had it been a fatal accident, it would have been more serious," he said.

The prosecution had called for a fine, and said there was no evidence Lai drove above the speed limit. The Attorney-General's Chambers told TNP it had considered all the relevant facts of the case and the sentencing precedents set in similar cases.