FAS to take action over brawl at local football match 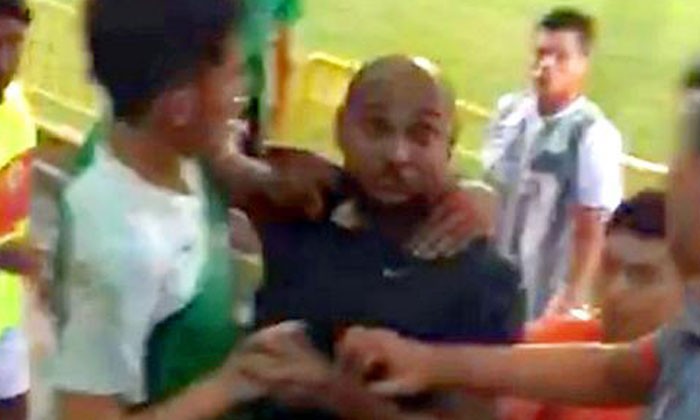 The Football Association of Singapore (FAS) has stated that it would take "stern action" against players involved in an alleged brawl during a Singapore FA Cup match at Bukit Gombak Stadium on Sat, Oct 1.

The match was between Singapore Armed Forces Sports Association (SAFSA) and Balestier United Recreation Club and the fight occurred in the 88th minute of the match.

Stomper Darius alerted Stomp to SAFSA's captain, Shafiq Siraj's Facebook post, regarding the brawl and how he was chased by the opponent's team.

The post was made on Oct 2, 2016 where he also mentioned how his mother got hurt in the brawl.

According to The New Paper, SAFSA were leading 2-1 when players, Safa's Fuad Ramli and Balestier's Masnashzeen Masturi got sent off.

Fuad got sent off for pushing an opponent and Masnashzeen for reacting by allegedly punching Fuad.

Eyewitness saw an angry exchange between Balestier players and Syafiq - who did not play in the game - after Masnashzeen left the pitch.

The exchange led to a number of Balestier players chasing Syafiq into the stands.

An FAS spokesman has mentioned that, "The FAS is aware of the incident during the FA Cup match between Balestier United Recreation Club and SAFSA on Saturday night.

"We would like to reiterate that the FAS does not condone violence of any form, and the alleged behaviour has no place in football.

"We understand that a police report has been lodged, and will provide the police with all co-operation and assistance necessary.

"In addition, we are also conducting our own investigation and stern action will be taken against any offender."

Another eyewitness told TNP that police officers arrived at the scene within minutes of the incident.

FAS council member S Thavaneson, who is the chairman of both Balestier United Recreation Club and S.League side Balestier Khalsa said, "I have already informed (FAS) that I will exclude myself from any investigation.

"I think we need to get all the reports first and, without doubt... the most severe action has to be taken against all the errant parties."

Thava added that his club will be conducting an internal investigation, and has asked for his officials and players to submit reports.

Related Stories
Man hits Geylang pub patron in eye with glass until he has permanent eye damage
Two men brawl in the middle of the road at Geylong Lor 1 -- while onlookers stand around and watch
10 arrested after brawl at Bugis Street: Fight was due to 'growing resentment' between 2 stallholders
More About:
fight
damage
injured
Football
sports