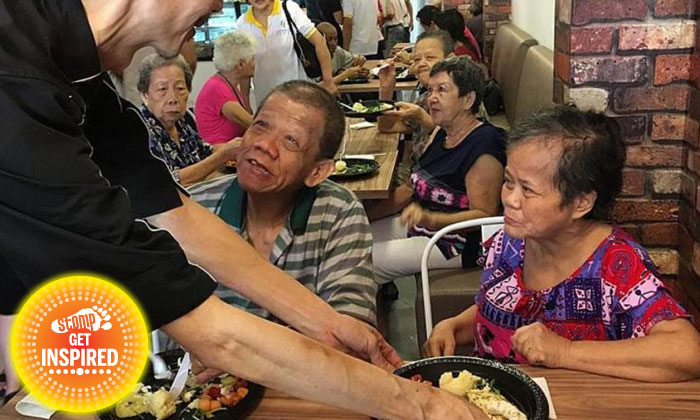 He used to own three mobile phone shops and a condominium unit, but lost it all 10 years ago after huge losses betting on football.

One of his daughters had to climb out of a window to get to her Primary School Leaving Examination because loan sharks had locked their flat.

On Saturday, Mr Lim (not his real name) showed no hint of his previous worries as he happily dished out a four-course meal for about 40 senior citizens.

We are not naming him and his family in this report to protect their identities.

The Christmas lunch was co-organised by South Bridge Road cafe The Usual Spot - where Mr Lim, 46, has been the executive chef for four months - and Blessed Grace Social Services (BGSS), which helped him quit gambling completely earlier this year through its Gamblers Recovery Centre.

The lunch, sponsored by Mr Lim's bosses at The Usual Spot, was a way for him to give back.

"I did not get to contribute back to society when I was earning a lot," Mr Lim told The New Paper.

He attends weekly support group meetings at BGSS, where he shares his story with problem gamblers.

Even after Mr Lim lost his businesses and his home, he would still gamble occasionally, racking up losses in the thousands.

"He once tricked me into pawning my phone so he could have money to gamble," said his youngest daughter, a 16-year-old, who helps out at the cafe with her mum and sister.

Mr Lim and his wife have five daughters and a son.

His wife, 49, told TNP she gave her husband an ultimatum earlier this year, after another fight over his gambling.

"I told him it was his last chance. He was remorseful, and tried looking for help. One day, he found BGSS' website on his phone and we decided to visit," she said.

BGSS reaches out to the elderly and drug and gambling addicts. It was founded in 2012 by Mr Billy Lee, 60.

As a pastor in his previous church, Mr Lee came across cases of families affected by gambling addiction.

One involved a church member who killed his wife and two children before killing himself.

Mr Lee told TNP: "That shook me because I lost a family in one day."

About 180 people have successfully quit gambling thanks to the support group, said Mr Lee. There are 300 gamblers in the group today.

After two decades of ups and downs, Mr Lim is finally content with what he has - a job, home, family and religion.

He said: "The family has never been filled with so much peace and joy."