Ex-insurance agent earns hundreds a night catching Pokemon for others 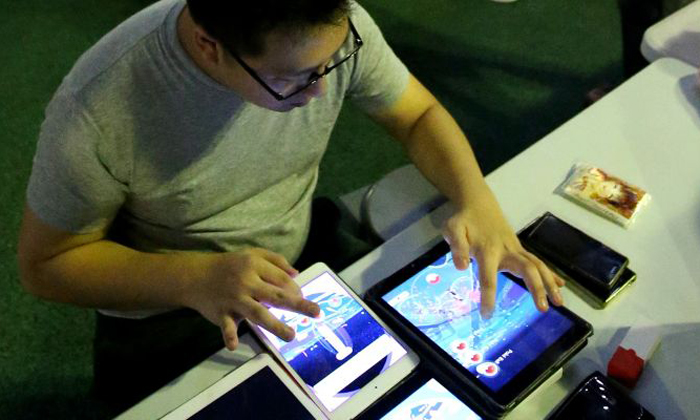 Almost every evening, Mr Brandon Tan plonks himself down near a PokeStop.

He then plays the game on four iPads, his fingers flying across the screens, spinning PokeStops and throwing Pokeballs. He even looks like a deejay at the turntables.

But Mr Tan, 25, is actually being paid to "power-level" the accounts of other Pokemon Go players.

He charges these players $25 an hour. He will log in to their account and help them gain experience points in the game.

If a player "books" him for eight continuous hours, Mr Tan offers the ninth hour for free.

The New Paper reported on Aug 11 that other players are offering such levelling up services on marketplace application Carousell.

However, sharing an account is actually frowned upon by the game's developer Niantic Labs, which considers it cheating. Those caught doing it may be suspended or have their account terminated.

Mr Tan, who worked as an insurance agent for a year, is not holding a full-time job.

Since starting this service on Aug 16, he said he has earned a four-figure sum from about 20 clients. About half are based in Singapore. The rest are from countries such as Austria, Switzerland and the US.

"In other countries, PokeStops are far away from each other. We're lucky that in Singapore, we have clusters of PokeStops. So these players from other countries would ask me to help them level up," Mr Tan told The New Paper.

Local players, on the other hand, approach him because they may not have the time to play.

"Some paid me (to play) for nine hours a day, for five days straight," he said.

Mr Tan has advertised his services on his Facebook page. He also places two iPads - displaying an ad for his services - near where he sits every day to play the game.

He changes his set-up depending on where he can find a comfortable spot, whether it is a playground next to Block 401, the void deck or a nearby coffee shop.

Mr Tan, an active gamer of about seven years, has a YouTube channel, BrandonTan91, where he uploads videos of himself playing Clash Of Clans and Clash Royal. The channel has over 166,000 subscribers.

He said he earns about $1,000 of advertising revenue from YouTube every month.

Pokemon Go players The New Paper spoke to said they probably would not hire Mr Tan.

Student Jedidiah Seah, 24, said doing so would take away the joy of playing the game.

"When I catch rare Pokemon or level up, it is my own personal achievement," he said.

Related Stories
Hate your job? Wait till you see what these people have to do at work
Super 'on' flower-seller in China latches onto customers who refuse to buy from her
How enterprising: Show your Pokemon level and get free ice-cream from this van at Punggol Park
More About:
pokemon
Pokemon GO
craze
jobs
money
interesting jobs