Employer of domestic helper with kidney failure seeks $50,000 to continue treatment in Indonesia 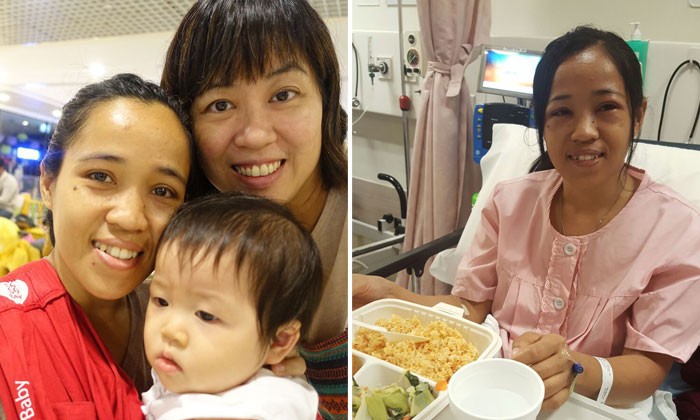 Tammie Too and her maid, a domestic helper, cried and hugged each other after finding out that Dasiyati has to go through surgery since she was diagnosed with kidney failure.

Dasiyati returned to Singapore from Semarang, Indonesia on Jan 9 after a short break but was brought to a general practitioner after Tammie discovered she had water retention.

There were blood and protein in her urine and since her blood pressure was 200, she was admitted to a hospital immediately.

Her body started to hurt and after one week of examinations at Changi General Hospital, it was confirmed that she has kidney failure and her kidneys are functioning at only 10%.

The next treatment will be dialysis which the doctor had predicted to be taking place in a year's time.

Eventually, she will need to undergo a transplant surgery.

With her condition, there is no way she can continue working and Tammie worries about Dasiyati financial condition when she goes back to Indonesia and has to pay for multiple surgery.

Dasiyati has a daughter who is still going to school and her husband struggles to find work back home.

Tammie has managed funds donated to her to ensure the funds will be used properly and will be providing an update on her GIVEasia web page.

She will also be giving her money to help them to sustain their livelihood.

For now, her family is hoping to raise $50,000 to help her and her family resettle nearer to a hospital and for initial treatments and medication.

They also need help in advice on where should Dasayati go for treatment in Semarang.

So far, they have collected just over half of what they aim to raise from 202 people who all wished Dasiyati the very best.