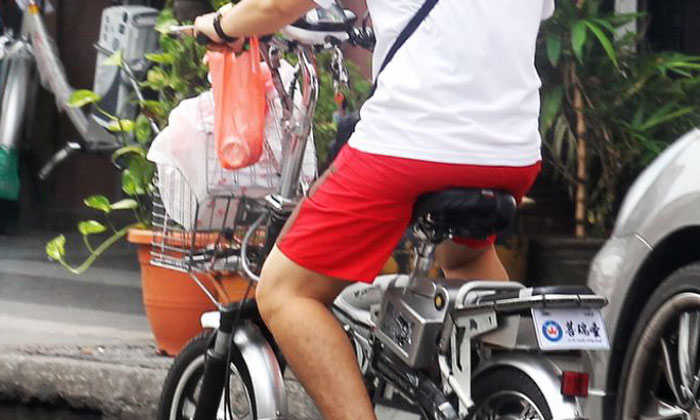 He knew he could ride his power-assisted bicycle, also known as an e-bike, only on the roads.

While doing so, he crashed into housewife Heng Lian Cheng, then 68, who suffered a head injury and facial fractures after falling face first from the impact.

Tan did not help her up nor check if she was fine.

Instead, he apologised, handed her a piece of tissue paper and rode away.

As it turned out, his victim lives on the fifth storey of the same block, though they did not know each other.

Tan, 40, was jailed for five weeks yesterday after pleading guilty to causing grievous hurt by performing a rash act.

Before handing down the sentence, District Judge Lee Poh Choo said while it was "convenient, fun and fast" to "zip around" on the bicycle, it was also Tan's duty to ride in a safe manner.

She also felt that motorised bicycles are more dangerous than cars because, unlike drivers, riders do not need a licence to operate them.

He used the e-bike, which is approved by the Land Transport Authority (LTA) and was not illegally modified, to travel to and from his workplace at Geylang Lorong 34.

On the day of the offence, he left his home around 9.15am to go to work, riding on the pavement towards Block 120 despite knowing he was not allowed to do so and he could crash into pedestrians.

As he turned right around a corner at Block 120, where his view was blocked by a pillar, his e-bike knocked into Madam Heng, who was going to a market at Block 89, Circuit Road.

He had tried to brake but because he was travelling at an unsafe speed, he could not stop in time.

The speed was not mentioned in court.

After he rode away, Madam Heng managed to get up by herself.

A man approached her to see if she needed an ambulance and told her he recognised the rider as "Ah Huat".

She declined his offer but later went to a general practitioner when her husband saw her severe injuries.

She was referred to Changi General Hospital, where she was warded for four days, and later readmitted for surgery on her facial fractures.

Tan surrendered himself at the Geylang Serai Neighbourhood Police Post on April 21 after a relative told him the police were looking for a man known as Ah Huat.

When TNP visited Madam Heng yesterday, she declined to comment, apart from saying she was feeling better now.

Madam Tan, who shares the four-room flat with him, his wife and their two daughters, is worried about their financial situation now that he is behind bars.

She said his younger daughter is only a month old, while his older is 12 years old.

"He used the bicycle to go to work, and to fetch his daughter from school," she added.

For causing grievous hurt by performing a rash act, Tan could have been jailed up to four years and fined up to $10,000.