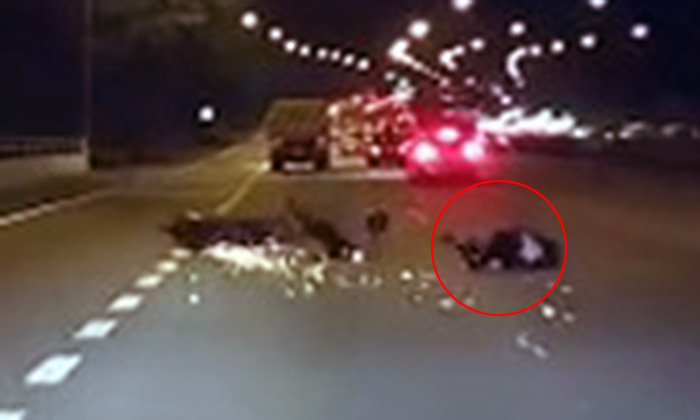 A motorcyclist and his pillion rider were sent flying across the lanes of SLE after a driver made a reckless lane change and crashed into them at 7.40pm on Wed (Oct 5).

The motorcyclist shared a clip of the accident on Beh Chia Lor - Singapore Roads, which was caught on the car-cam of a vehicle that was nearby at the time of the collision.

The video shows a driver recklessly cutting across multiple lanes of SLE.

The driver ends up knocking into the motorcycle, sending both the rider and the pillion rider flying across the expressway.

Sparks fly as the motorcycle also skids across the road, and the rider can be seen rushing to his feet to bring the pillion rider to safety.

Other riders are seen stopping to help the victims, while the driver, on whose car-cam the incident was recorded on, also stops along the side of the expressway.

The driver who knocked into the motorcyclist can be seen in the clip, stopping to check on the aftermath of the accident.

"Hope this video is able to remind road users to stay alert of their surrounding," sai the rider.

"Both me and my pillion rider suffered abrasions and were conveyed to Khoo Teck Puat hospital."