Driver of illegally parked Honda shares his side of the story 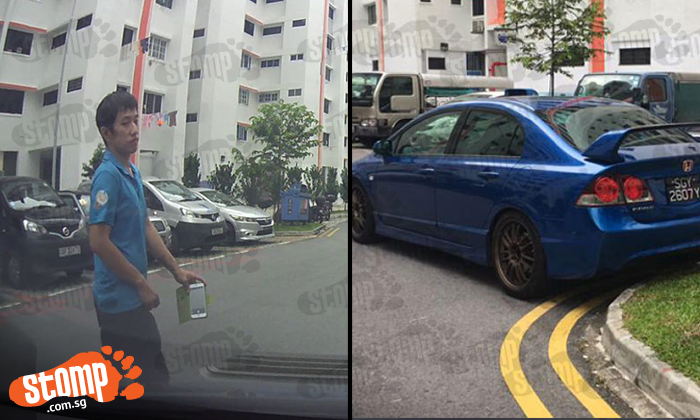 The driver of a blue Honda that was parked illegally at Block 246 in Jurong East yesterday (Nov 13), and left with a note by Stomper Ivy has come forth with his side of the story.

The incident started when Stomper Ivy saw a Honda that parked on double yellow lines.

She subsequently left a note on the driver’s windshield that read:

"Disgraceful. This Honda Civic Type R park like this can meh?

"Not even a lot or a handicapped lot or a loading bay, got special privilege?

"Anyway you have been Stomped!!”

This morning (Nov 13), the driver of the Honda, Stomper difficultbuy sent in three videos, showing a man instead of a woman, leaving a note and snapping photos of his car.

Difficultbuy also claimed that even though his car was parked illegally, it was not blocking traffic, and that it is ‘common practice’ for residents there to park the way he did.

The videos taken by the car camera showed the incident to have happened around 6:30pm, and the date to be Nov 2.

Difficultbuy explained that the car camera was faulty and the incident happened around 5pm yesterday (Nov 13).

“I saw him take pics when I was hanging my clothes at kitchen.

“The last video shows him taking a picture of his note from his truck."

In the video, the truck was seen stopping by the Honda for a short while.