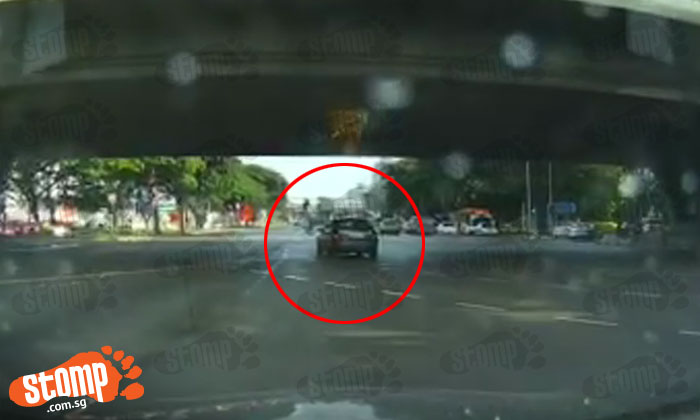 Stomper Ivan saw a driver of a Mercedes C180 driving recklessly across a junction along Paya Lebar Road on Oct 14 at around 8.15am.

In a video the Stomper sent, the Mercedes driver can first be seen entering a lane for drivers to make a right turn before the junction.

As he or she reached the junction, the traffic light was showing red for drivers going straight.

Drivers however could right into the PIE as the green right-turn arrow was showing as well.

The Mercedes went past the stop line, suggesting that the driver wanted to turn into the expressway.

After passing the traffic lights however, he or she then went straight and continued driving along Paya Lebar Road.

Said Ivan with regard to what happened:

"I am not sure if the driver did this to beat the red light or if he or she decided last minute to go straight.

"It was very dangerous as vehicles from the opposite side would also turn because the traffic lights were in their favour as well. Thankfully there were no vehicles turning at that time.

"What the Mercedes driver did was very dangerous."