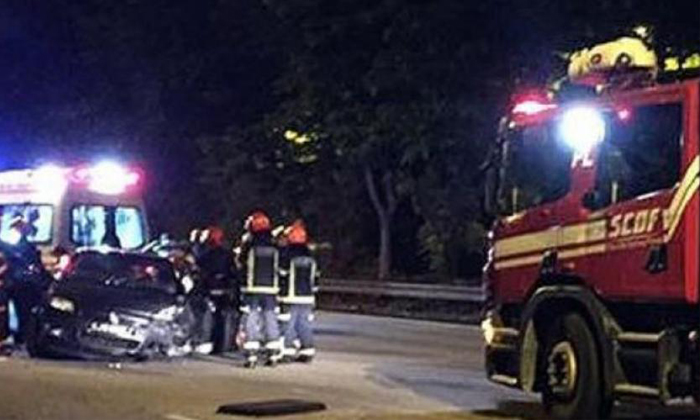 A car was traversing the Pan-Island Expressway (PIE) towards Changi Airport, when it spiralled out of control and rammed into the railings, killing its 40-year-old driver.

The accident occurred yesterday (Nov 2) at around 1.49am.

The black Fiat was navigating a right turn when the car skidded and the driver, Tan Hock Hai, lost control and crashed into the railing straight ahead.

According to Lianhe Wanbao, the impact caused a piece of the railing, about five metres long, to pierce the front bumper and sever Tan’s left arm.

Tan died from severe blood loss on the scene.

The deceased is believed to have been returning from a gathering with friends when the accident happened.

Seven people went down to the morgue to identify the deceased, including his wife and children.

Mr Azhari, a 32-year-old businessman was driving home at 1.50am when he came across the vehicle.

He stopped his car by the side of the expressway and went to check on the driver, only to find Tan motionless, and his severed arm near the wrecked car.

According to Mr Azhari, one other driver also stopped to help.

Said Azhari: "According to the other car driver, who arrived about a minute before me, all the cars who were ahead of him just drove past."

The police and the Singapore Civil Defence Force (SCDF) said they were alerted to the accident at about 1.50am yesterday.

The SCDF sent two fire engines and an ambulance to the scene, where paramedics pronounced the driver dead.

Still reeling from the horrible aftermath of the accident, Mr Azhari posted about it on his Facebook page, as well as the JB Traffic, Road Block & Portholes Report Facebook page, to warn road users to be careful when driving along that stretch.

He wrote: "Please slow down when travelling along PIE towards Changi, at the dangerous bend under the Safti bridge. Especially those travelling on PIE from Tuas Checkpoint."

The Police said in an official statement: "On the 2nd November 2016 at 1.49am, the police were alerted to an accident involving a car along PIE towards the airport after the Upper Jurong Road exit.

"The 40-year-old male driver was pronounced dead on scene.