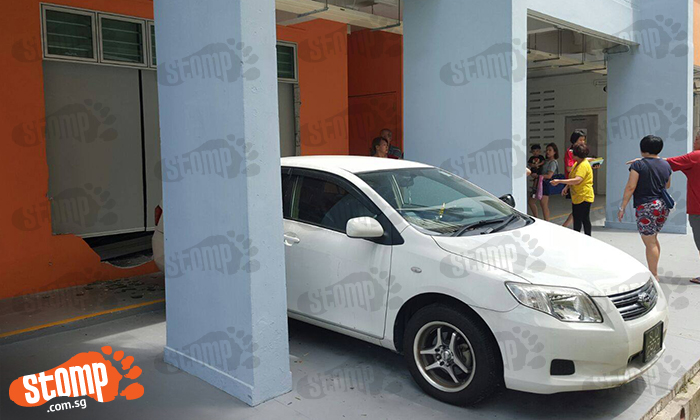 Stompers Xieloong and Serene were shocked to see that a driver had crashed his car right into the childcare centre at Block 676 Hougang Avenue 8 today (Jan 22) at 1pm.

Xieloong said her neighbours had seen the crash, and she saw the aftermath of the accident.

Photos sent to Stomp by both Xieloong and Stomper Serene show that the car had crashed into the wall of the childcare centre at the void deck of Block 676.

Many concerned passers-by can be seen standing nearby.

"The guy with the blonde hairdo is the driver," said Xieloong.

In response to Stomp's queries, the SCDF said that it received an alert for assistance at 12.50pm and dispatched one ambulance to the scene.

A Chinese man in his early 50s refused conveyance to the hospital and no injuries were reported, said an SCDF spokesperson.