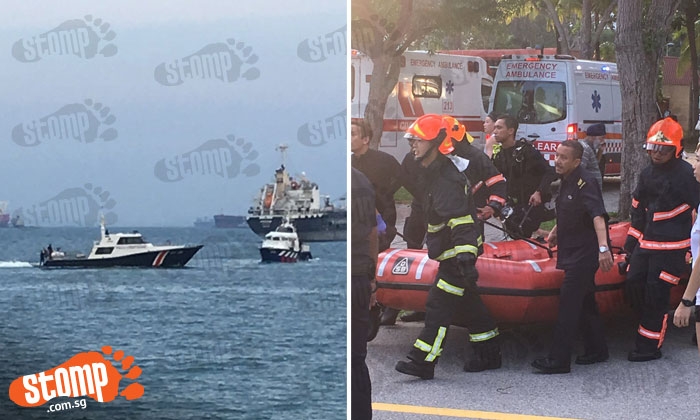 Stomper Keith was at East Coast Park on Aug 7 at around 5.30 pm when he saw rescue personnel searching for something in the sea.

In a telephone interview with Stomp, Keith reported seeing SCDF personnel, officers from the Police Coast Guard as well as divers at the scene.

At one point, the Stomper also saw a life buoy being thrown into the water.

He eventually saw something being retrieved from the sea but could not make out what it was as he was standing a distance away.

When contacted, an SCDF spokesperson said:

"We were alerted at around 5.35pm to a case of two persons who encountered difficulty in the sea near Marine Cove, East Coast Park.

"Upon SCDF arrival, the two persons have already been rescued by the Police Coast Guard.

"SCDF deployed an inflatable rescue boat to bring an elderly and a male teenager from the Police Coast Guard boat back to shore where SCDF ambulances were on standby.

"Both of them were conscious and stable and refused to be conveyed to hospital."