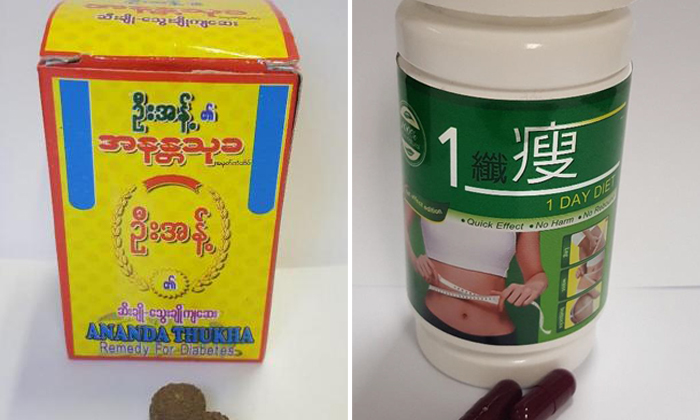 The Health Sciences Authority (HSA) is alerting members of the public to stop buying and consuming three health products which have been found to contain undeclared potent Western medicines, including the banned substance sibutramine.

The advisory follows local reports of adverse reactions to the products.

A woman in her 60s who consumed Ananda Thukha Remedy for Diabetes for about three months was hospitalised after she was diagnosed with agranulocytosis, a serious blood disorder in which the patient has a low white blood cell count and is prone to falling sick from infections.

She had bought the product, marketed as a "medicine for complete cure of diabetes", from a shop in Peninsula Plaza.

The HSA has seized all the implicated products from the shop for further investigation.

In another case, a woman in her 30s experienced breathing difficulties, increased heart rate, and excessive sweating of palms after consuming 1 Day Diet for over a week.

The HSA said the reactions are caused by sibutramine, a prescription-only weight loss drug used in the treatment of obesity which has been banned from sale in Singapore since 2010 due to serious safety concerns.

The consumer had bought 1 Day Diet, labelled as a "100 per cent pure natural" slimming product with "quick effect" and "no side effect", online.

In a third case, a man in his 50s suffered low blood pressure and low levels of cortisol after he stopped using Bee Brand Qi Li Xiang.

These are symptoms typically associated with steroid consumption, the HSA said.

The product was purchased overseas by the man's wife to help treat his body aches. He had used it for about a month.