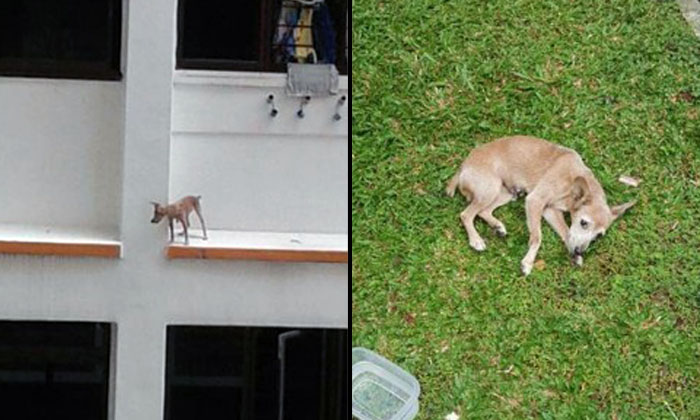 A dog was injured after falling from the third-storey ledge of an HDB block on Sun (Oct 9), before an SPCA rescue officer was able to get to it.

The SPCA made a Facebook post on the incident, prompting many netizens to express concern for the dog and slam the owner.

In the post, SPCA stated that the dog appeared to have pushed aside the temporary barricade that the home owner placed on her service yard and could not get back in thereafter.

A neighbour who had spotted the dog on the ledge immediately alerted SPCA about the incident.

An SPCA rescue officer, Daniel, rushed to the scene to rescue the dog but she had fallen off the ledge before his arrival.

The injured dog was tended to by an SPCA consultant vet.

The owner had to collect her dog from SPCA later, after reading the note which was left at the unit as there was no one home at the time of the accident.

"We urge all pet owners to pet proof their home, by installing appropriate grilles or wire-meshing on the windows and doors, to prevent pets from falling or slipping out.

"Dogs do get spooked, for example by the sudden sound of thunder, and may leap out the window, unknowingly.

"We thank the caller who alerted us to this case and for assisting us by keeping watch on the dog while waiting for our rescue officer's arrival.

"The dog is currently under the care of the owner's private vet and we wish the dog a speedy recovery."

Related Stories
Driver who saw moving plastic bag along the road heartbroken by what she found inside
Watch shocking video of tiger dragging woman away before mauling her to death at Beijing wildlife park
Huge adult boar bolts across Punggol Road in front of oncoming traffic
More About:
Dog stuck on ledge
dog falls from 3rd storey
SPCA
dog
injured
heartbreaking