Does this poor teddy at Plaza Singapura look a little... dead to you? 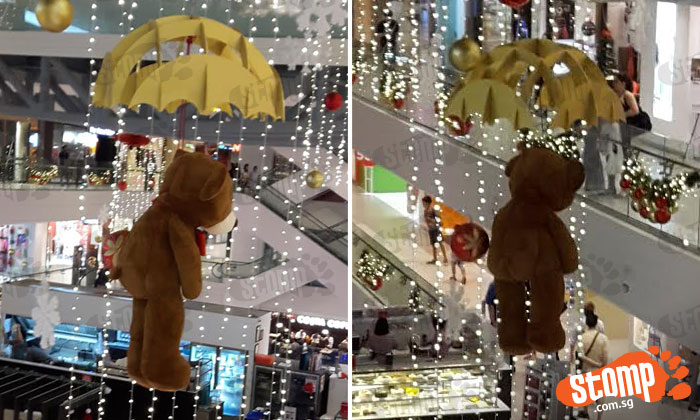 In an email to Stomp, the Stomper said that he saw huge teddy bears suspended from the ceiling of the mall.

Alvin felt that the way the bears were hung made them look like they were being strangled.

He recounted what his experience in an email:

"The bears were suspended from the back with ropes but when you look at them from the front, it is as if a rope had been strung around their neck.

"It gives a very bad image and negative influence when you take a second look at it. The bears seem to have committed suicide by hanging themselves.

"Many people walked past and did not seem to realise that but from different angles it is very unsightly.

"I urge the team behind the decorations to relook and redesign, for example, the bears can be fixed on chairs or sitting in wrapped boxes and then suspended with cables.

"This way it does not show signs of strangulation or suicide or any other negative acts.

"There were three or four of such bears at the mall."

Related Stories
Did King Kong climb Block 286 in Bukit Batok? Seems like he left his slippers behind
It's not every day you see dolphins having a splash at Singapore Eastern Anchorage
unusual
funny
decoration
mall
bear
Christmas
bizarre