'Director pushed me to be cynical and mean': Host in Toggle's offensive fashion police video 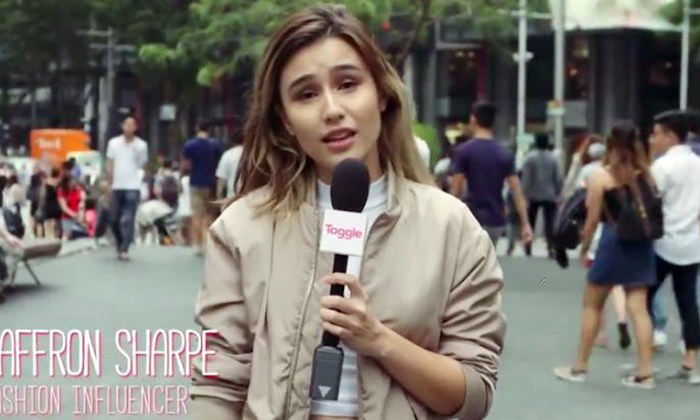 The video runs just about two minutes and was meant to promote a new segment in Toggle's web series Double Trouble.

What happened next spelled big trouble for Toggle, MediaCorp's online TV service, the creators of the video, and its host, social media personality Saffron Sharpe.

Soon after the video was posted on Toggle's Facebook page on Monday afternoon, a storm of criticism erupted online over its content.

Its sin was poking fun at the fashion sense of innocent bystanders on Orchard Road, with Sharpe's tongue seemingly living up to her name with her snarky appraisals of her "fashion victims".

Not surprisingly, Sharpe, who was a finalist in The New Paper New Face contest in 2013, took the brunt of the online onslaught. One Twitter user called her "a prime example of 'beauty without brains'".

Another said: "Saffron Sharpe looks so beautiful until she starts talking."

Facebooker Denyse Lee said of the video: "It comes across as mean-spirited and negative. Let people wear whatever they want... Shaming them for their outfit choices doesn't reflect badly on them, it reflects badly on you."

Samantha Ngau also went on Facebook to describe the footage as "really lazy show content" that is "judgmental and materialistic."

Toggle apologised on Facebook for the "offensive" video soon after it was taken down early on Wednesday.

Sharpe, 19, told The New Paper over the phone that she had felt uncomfortable doing the video and that some of the comments were not hers, but had been scripted on the spot by video director Belinda Ang.

"Personally, when they told me about the idea, I felt a bit hesitant at first because I knew it wouldn't really sit well with the public," she said.

"But considering the fact that I was already on set, and my friend who got me the job was there, and Belinda seemed really excited about the shoot, I didn't really want to go against it.

"It was awkward to just walk off and say, 'I can't do this', so I just went along with it."

Referring to the online criticism, Sharpe said she was surprised to see vitriol like "You're disgusting" and "You should die".

She said: "I was quite taken aback and some of the statements were quite hurtful. But I put myself out there on social media, so I do expect these (negative comments) to come."

Describing the incident as a learning experience, Sharpe added: "I'm taking it as a learning step for me rather than worrying about my career because these things can change in time.

"I just have to learn from my mistakes and be more responsible for my actions."

Sharpe, who has 66,800 followers on Instagram, got the gig through a friend who used to work for Miss Ang's company, thinkBIG Communications.

"I felt quite uncomfortable criticising random people on the streets, so I clarified with Belinda and she told me that it wasn't going to be an issue as these people's faces were going to be covered with the faces of Mark Lee and Kumar."

In the video, the faces of the "fashion victims" were covered with face masks of Lee and Kumar, the comedian hosts of Double Trouble, to give them a veneer of anonymity.

Sharpe said that Miss Ang would prompt her on who to target and what to say.

"There was this uncle who wore a minion outfit, Belinda was like, 'It would be funny to comment about it because minions are trending'.

"I like minions and I didn't really want to comment about a random uncle walking on the street, so I was pushed into this uncomfortable situation," she said.

"Belinda would suggest to me, 'Why don't you talk about this person's outfit, it looks quite comical', and if what I said wasn't good enough, they would push me to be more cynical and mean, so it would come off as more entertaining."

Last evening, soon after TNP e-mailed Miss Ang questions about the video and Sharpe's comments about her, this post appeared on her Facebook account: "All I can say is, doesn't pay to be nice, helpful and supportive.

"People resort to blatant lies and accusations when they are in a panic. BUT #BeNiceAnyway. Act, don't react."

A spokesman for thinkBIG Communications later told TNP in a statement: "The "fashion police" video was a promo clip for an episode of Double Trouble on Toggle, which Saffron was a guest on.

"All parties involved in the production were briefed of the creative direction of the video prior to and on the set itself."

The subjects filmed were censored to protect their identities as the intent of the video was never personal but to start a conversation on street fashion, positioned as a tongue-in-cheek fashion policing. We would not have proceeded with filming if at any point anyone was uncomfortable with it."

SOME OF SHARPE'S COMMENTS

"Chinese New Year was in February, let's move on, guys."

"What?! No matter how hot it is, right, never wear a visor out. Fashion disaster... no."

Uh... that skirt probably will be found in Mean Girls, but that was about 10 years ago. Terrible."

The "fashion police" video was posted on Toggle's Facebook page at around 4pm on Monday.

It sparked a flurry of online criticism that the video was mean and offensive in poking fun at passers-by on Orchard Road.

By early Wednesday morning, Toggle had removed the video.

Not long after, at 1.41am, it posted an apology on its Facebook page.

A spokesman for Toggle told The New Paper yesterday: "Because of the reaction to the video, we pulled it."

"There is actually no "fashion police" segment on the show, and Saffron Sharpe is not the host.

"Episode 14 of the series covers fashion, and Saffron Sharpe was the guest on that episode and discussed fashion in a brief three-way conversation with the hosts."

Toggle said in its Facebook apology: "We never meant to cause hurt or insult. The "policing" was part of a publicity campaign for an upcoming programme, done in the same tongue-in-cheek, irreverent way we might critique celebrity fashion.

"It wasn't intended as a serious judgment of the way any of us dress. That said, again, we really should have known better and have of course pulled the video."

Double Trouble is touted as an unconventional web series about all things Singaporean, where comedy and truth collide. It is hosted by local comedians Mark Lee and Kumar.