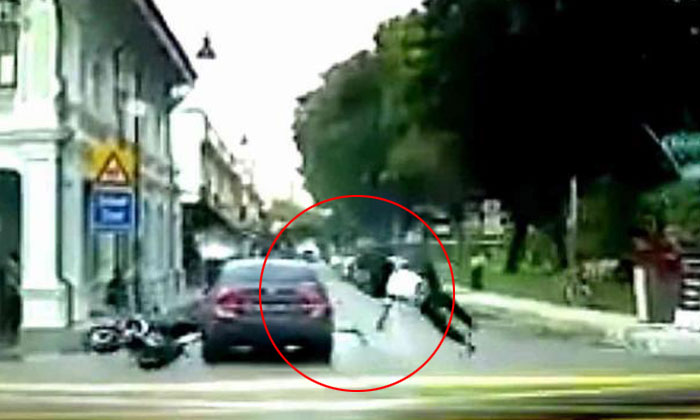 In a dramatic collision with a car, a motorcyclist somersaulted into the air over the vehicle and landed hard on the wet road without his helmet - but fortunately for him, it ended well.

He is unhurt and "at home resting", his employer, food delivery company Deliveroo, told The Straits Times.

The collision occurred at the junction of Tembeling Road and Koon Seng Road on Sunday.

A dashboard camera video posted on EverydaySG was viewed more than 100,000 times yesterday and had 2,000 shares.

Ms Neha Mathur, head of marketing at Deliveroo, told The Straits Times: "We've been in close contact with the rider and, following a medical assessment, we can thankfully confirm that the rider was uninjured in the accident."

The video footage showed the car travelling on Tembeling Road and crossing Koon Seng Road when a motorcycle approached from its left and crashed into its side.

Nevertheless, online comments were divided, with netizens blaming both the motorcyclist and the motorist for the accident.

Some criticised the motorist for allegedly not stopping at the white line at the intersection's stop sign.

Others said that she should have inched forward into the yellow box at the junction to check whether there was anyone approaching from the left.

Still others blamed the motorcyclist for not being cautious or slowing down as he neared the yellow box, which was on his right.

A resident in the area told The Straits Times that the junction where the accident occurred is "problematic" for motorists.

Those intending to go across Koon Seng Road are not able to see oncoming traffic on their left, even with wide-angle mirrors nearby.

Deliveroo said all riders are required to meet safety standards and abide by traffic rules.

It remains unclear what damage was sustained by both vehicles.

Police told The Straits Times that the 23-year-old motorcyclist was taken to Changi General Hospital (CGH). Investigations are ongoing.

A CGH spokesman confirmed that the motorcyclist was discharged the same day.