Man allegedly killed after affair with suspect's wife: Almost every bone in victim's face was fractured 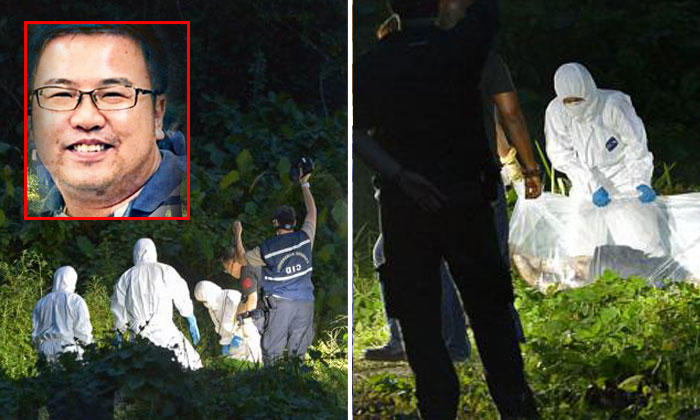 Mr Dexmon Chua's decomposing body was found in a forested area in Lim Chu Kang with injuries so serious that almost every bone from his eye socket down to his lower jaw was fractured.

Forensic pathologist Gilbert Lau of the Health Sciences Authority said these facial injuries were likely to have caused his death.

Yesterday, Prof Lau told the court that Mr Chua's injuries were possibly caused by a blunt object with great force.

It is likely Mr Chua was bashed in the face with a hammer or a wooden object, he said, adding the victim's face could have been stamped on.

Prof Lau said he could not rule out the possibility that Mr Chua's injuries were caused by punches, but added the assailant would have to be an exceptional martial arts expert because he doubted ordinary fist blows could have caused such fractures.

The forensic pathologist was not able to determine the number of blows landed on Mr Chua's face as the body was too badly decomposed.

Prof Lau, however, said there was more than one blow.

Such fractures to the nasal and jaw areas could cause very profuse bleeding, he said.

It could also cause the facial bones to collapse and affect the victim's upper airway, he said.

Other than the blunt force trauma to the facial bones, which Prof Lau concluded was the cause of death, Mr Chua's other injuries included an extensive loss of scalp and five fractured ribs.

Mr Chua was dead for about three to four days by the time his body his found, said Prof Lau.

Deputy Public Prosecutor Eugene Lee asked Prof Lau why the victim's head was found to be significantly more blackened than the rest of his body.

The forensic pathologist said that could have been due to the numerous open wounds on the face.

Prof Lau also said that Mr Chua was unlikely to have been assaulted at the Lim Chu Kang live firing area - where his body was found - as there was not much disturbance to nearby vegetation.

If convicted of murder, Chia could face the death penalty or life imprisonment.

It was 3am and Mr Goh Beng Guat was awoken by a phone call from his brother-in-law, Chia Kee Chen, who insisted they meet at Mr Goh's void deck.

There, Chia claimed he had fought with a man and needed Mr Goh's help to carry the other party.

Mr Goh, however, refused as he did not want to do anything illegal and he went home to sleep.

These details emerged in Mr Goh's statement to the police that was read out in court while he was on the stand yesterday.

Chia told him that his wife, Madam Serene Goh, had been under a spell for two years, so Chia confronted the man who allegedly cast the spell.

Chia said the man refused to release the spell, and they fought.

He asked his brother-in-law to help carry the man.

Mr Goh told the police: "At that time, I did not know whether he was telling the truth. I told him I would not do anything illegal and I did not want to know."

Mr Goh was originally scheduled to testify on Tuesday, but he instead checked himself into the Institute of Mental Health that day, the court heard earlier this week.

Yesterday, he took the stand and said he had just been discharged from "hospital".

Mr Goh appeared dazed and paused often - at one point even taking up to two minutes - before responding to questions from the prosecution and defence.

For example, when Deputy Public Prosecutor Dora Tay asked Mr Goh to identify Chia, he took a while to do so.

He then said: "Please don't ask me any more questions. I can't stand it any more."

Defence counsel Peter Fernando later asked Mr Goh whether it was true that Chia had contacted him that morning to talk about a bird-singing competition.

Mr Goh remained silent, with his arms folded and eyes closed for a while before saying he was feeling unwell.

After a long pause, Mr Goh said: "It's already in my statement."

When Mr Fernando repeated his point to Mr Goh, he paused for two minutes before saying that he refused to believe what Chia had told him.

Chia Kee Chen is on trial for allegedly murdering Mr Dexmon Chua Yizhi, 37, a materials analyst, between Dec 28 and 29 in 2013.

Chia and an accomplice, Febri Irwansyah Djatmiko, 33, an Indonesian who is still at large, allegedly forced Mr Chua into a borrowed van and assaulted him until he died.

Another accomplice, Chua Leong Aik, 67, a cleaning supervisor, drove them to Lim Chu Kang, near the area where Mr Chua's body was found.

On Tuesday, the court heard that Chia's wife, Madam Serene Goh, now 51, had told the police that her year-long affair with Mr Chua began after he started taking her home in his car from their workplace.

They later became intimate and had sex in his car, at his home and once in a hotel. Mr Chua even filmed their trysts, she said.

On Wednesday, Chua, who is serving a five-year jail term for abduction and voluntarily causing grievous hurt, testified that he did not know what he was getting into when he got into a van with Chia on Dec 28.