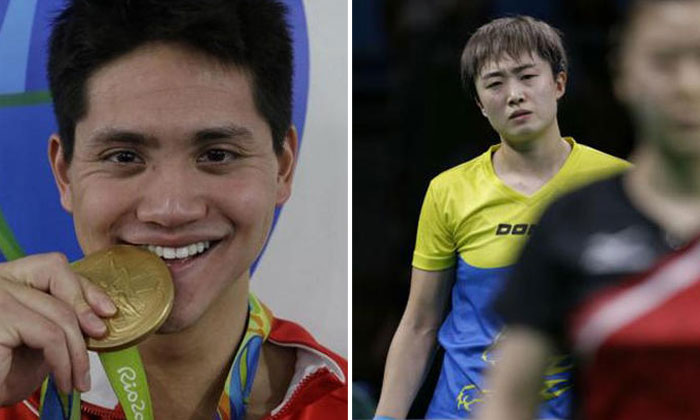 The Olympic dreams for Singapore's women's table tennis team have been dashed, after the trio - Feng Tianwei, Zhou Yihan and Yu Mengyu - lost the bronze medal to Japan in their final match on Aug 16.

Team Singapore will return home from the Olympics without a table tennis medal for the first time since 2008.

In a video interview published by Channel NewsAsia on its Facebook page, team captain Feng shouldered the blame for her team's defeat.

Looking disappointed, the 29-year-old told a reporter that while her team mates performed well, she felt responsible for the loss of two sets during the match.

And while she admitted that raucous cheers from fans of the Japan team had intimidated her, she said that there were some issues with her own performance that needed to be sorted out.

After the interview was posted by the news channel on Wednesday (Aug 17) morning, many netizens left supportive comments for the team and praised Feng for being honest and taking responsibility.

But it did not take long for critics to also weigh in.

Some were unhappy that the team spoke to the media in Mandarin, while others brought up the long-drawn issue that the team is made up of foreign-born Singapore citizens.

"Nobody cares if you win or not. You're not one of us anyway," one comment read.

Despite the negative comments, many Facebook users spoke up for the team.

One Facebook user by the name of Collin Tan said: "Whatever it is, these ladies sweat it out for Singapore. So what if they are from China and don't speak English?"

Another by the name of Susan Khoo pointed out that the issue lies in a lack of homegrown talents on the international scene. "I don't think many Singaporeans feel emotionally invested in our table tennis team. Their wins or their losses do not resonate with us. Maybe we need more homegrown talents? Just a suggestion," she said.

The debate over foreign-born athletes in Team Singapore is not a new one, but it seems to have been rekindled after swimmer Joseph Schooling bagged Singapore's first-ever Olympic gold on Aug 13.

In less than a week, the 21-year-old champion has returned home to a hero's welcome, and was given a standing ovation in Parliament. But the media frenzy over Schooling has once again sparked the debate of local versus foreign talent in Singapore sport.

Former national shooter and Raffles Girls' School student Zhang Jingna said on her Facebook page that the negativity was making her "sick".

Now a multi-award-winning fashion photographer based in New York, Zhang was born in Beijing and moved to Singapore at a young age.

Once named Sports Girl of the Year in 2006, Zhang said in a Aug 16 post that she had endured xenophobic insults growing up as a foreign-born child in Singapore.

"I thought the xenophobia I experienced as a child was just a number out of a pool of random experiences. Surely, I would grow up to be in better company than the strangers who told me I was about the same as sh*t, or that I would always be of the lowest classes of citizens compared to local-born Singaporeans. I was wrong.

"The hating on foreign nationals on my feed has reached a point where I am beginning to feel sick. To realise that some of these people are ones that I had once worked with makes it all the more painful," she said.

In a lengthy post, Zhang addresses some of the comments she had come across on Facebook in recent times.

Among these comments are netizens' calls for the Government to spend more money training and cultivating local athletes.

While acknowledging Joseph Schooling's "incredible" success, she points out that "it is of course easy to say all of these after he has already achieved what he has. But it doesn't always start and end like this". Some local-born athletes on scholarships overseas choose to never return, she says.

"If, for example, Joseph was indeed sent to the US on Singapore's dime and a) didn't win, b) never came back, or c) quit. I bet a lot of people would change their tune, and blame the Government for wasting money on a Singaporean who wasn't trained on Singapore soil, by Singaporean coaches," she adds.

Besides, it is difficult to groom young sportsmen in an academic-driven society like Singapore, Zhang points out.

Regarding those "purist" arguments that Singaporeans should not support athletes born in other countries, Zhang writes: "I sure hope your grandparents and theirs don't hear you saying this. It's heartbreaking."

"We all came from somewhere, we all benefited from the immigrants that our parents, grandparents and forefathers were. So let's stay civilised and not use racist and discriminatory words like 'purist'."

She also wonders if the treatment regarding Schooling's success would be different if he was not born in Singapore.

"Before you pass judgement the next time, please remember that people don't get to choose where they were born or what skin colour they were born with. At the end of the day, we are all the same on the inside - flesh and blood and bones, and a heart that's only trying to find our places in the world," she says.

Related Stories
China's adorable Olympic swimmer breaks taboo by talking openly about her period
Chinese hurdler gets vomited on and robbed upon arrival in Rio for Olympics
'Mascot' jaguar shot dead shortly after being paraded at Olympic torch ceremony in Brazil
More About:
olympics
controversy