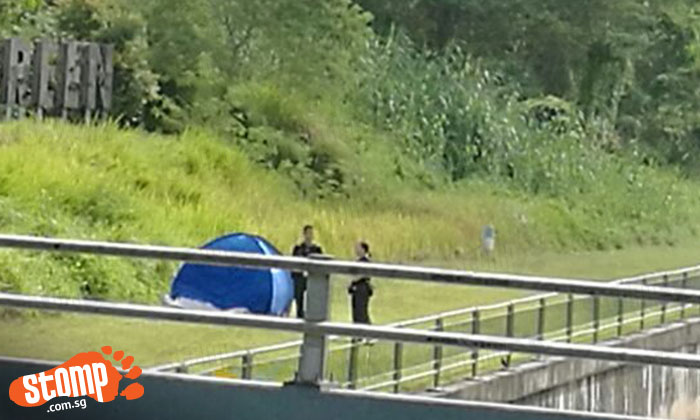 Stomper Bugatti was on board a bus heading towards Tampines Bus Interchange when he noticed a police death tent erected by the left side of a drain at Tampines Avenue 9, facing Tampines Eco Green park, today (Feb 16) at about 10am.

Two uniformed police officers were stationed near the tent, while a patrol car was parked on the right side of the drain.

There were also three people - an elderly uncle, a bespectacled man and a woman - in civilian clothing standing beneath the MRT track near the drain.

The bespectacled man was carrying a camera and seen taking photos.

“I did not notice the death tent at first, just the three people standing beneath the tracks.

“I was wondering why the man was taking photos.

“When I looked around further, I noticed a blue tent by the left side of the drain, and a police patrol car parked on the right.

“I’m not sure what happened, but it’s quite startling to witness such a scene in the morning.”

The deceased was a man in jogging attire, and there were no signs of injury, reports The Straits Times.

The body was taken away at about 10.50am, and the police cordons have been removed.

A passerby, 64-year-old retiree Francis Tan, told reporters that the victim looked to be middle-aged and in his forties:

"There were about five or six people with me, who gathered on the other side of the canal.

"We were wondering what happened.

"I saw the police officers take a few pictures of the body."

The Police have issued official lines on the incident:

"A 59-year-old man was found lying motionless and was pronounced dead by paramedics on scene.

"Police are investigating the case of unnatural death."

Watch a video of the incident below.