Death of 22-year-old who fell off e-scooter at East Coast Park was 'largely contributed' by not wearing helmet: Coroner 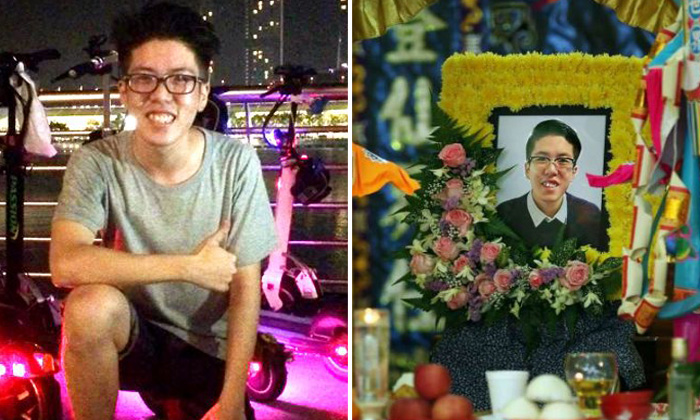 A well-known and passionate member of the electric scooter community, who worked at a shop that sells e-scooters, died in a tragic accident in March.

Mr Sam Koh Guo Cong, 22, had a broken skull and bleeding in the brain after falling from his e-scooter, while on his way from East Coast Park to Marina Bay Sands in the early hours of March 19.

He died in hospital the next day without regaining consciousness.

The speed he was travelling at is not known, but his e-scooter could go up to 45kmh.

Echoing remarks he made for a similar case - that of Mr Matthieu Thomas Maugueret's death after a fall from an electric skateboard in November last year - the coroner urged users of powered personal mobility devices to wear helmets.

"For Mr Koh's and Mr Thomas' cases, the evidence points to their ultimately fatal head injuries to have arisen from, or contributed largely by, their failure to wear helmets and safety equipment.

"Notably, Mr Thomas was a novice on his electric skateboard, while Mr Koh, who had logged over a year in his electric scooter, had still met with a similar mishap," said Mr Bay.

Mr Koh had worked for PassionGadgets as a sales assistant for more than two years and was popular among its customers. He was an e-scooter expert who also rode and repaired such devices.

At about 10.15pm on March 18, he met two friends at Tai Seng MRT station, before they went for supper at the market at Block 85 Bedok North Road riding their own e-scooters. All three did not wear any protective gear.

After their meal, they rode to East Coast Parkway and got there at about 12.20am, before continuing on a cycling and jogging track towards Marina Bay Sands.

The lighting was dim, but the path was visible as their e-scooters had head lamps. Mr Koh's friends rode in front of him.

At about 1am on March 19, after they had crossed the Green Connecting Bridge near the Tanjong Rhu Flyover, Mr Koh fell. His friends found him unresponsive and called for an ambulance.

Mr Koh was taken to Tan Tock Seng Hospital, but succumbed to his severe head injuries the next day.

In expressing his condolences to Mr Koh's family, Mr Bay acknowledged his organ donations. "From the gifts of his heart, liver and kidneys, Mr Koh would have impacted and changed the lives of individuals afflicted with organ dysfunction or failure, who would otherwise be without hope of living a normal life.

"It may be of some comfort to his family to know that Mr Koh's memory will live on in the gratitude of the persons who have received his priceless gifts of life and restoration."

Related Stories
So dangerous! Guy rides in the middle of Paya Lebar Road on electric scooter
Eh, your grandfather's road ah? Driver has near-accident with e-scooter rider who suddenly whizzed by
More About:
accident
youth
dead
death
injured
no helmet