'Cute but aggressive' rooster hangs out at Toa Payoh Lor 7 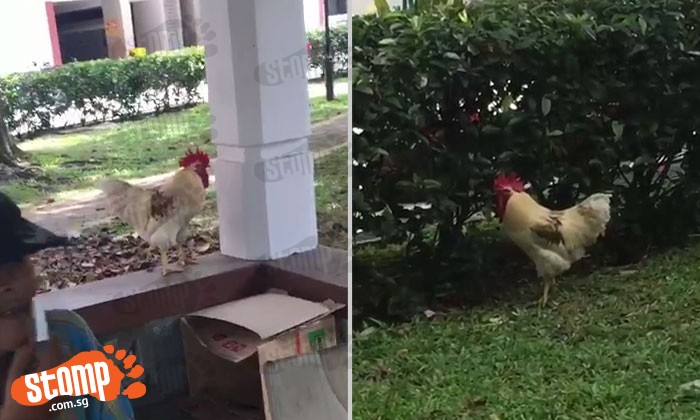 Stomper Aishah got chased by a rooster this morning (Oct 4) at Block 5 Toa Payoh Lorong 7.

In her videos sent via WhatsApp, the Stomper mentioned that the incident happened at approximately 11 am.

She mentioned how it "felt so funny being chased by a rooster."

According to her, the rooster had been a 'resident' in the area for the past 3 to 4 months.

Aishah said, "My husband was telling me one day, that he got chased by a rooster, and I just laughed.

"Apparently, the rooster was chasing somebody else and my husband thought nothing of it.

"When suddenly, the rooster came after him."

Aishah described the rooster as "super cute but super aggressive".

She added, "Even when you're walking, he'll just run after you."

The rooster had also crowed almost every morning at around 5 am for the past 3-4 months he's been in the area.

Stomper tried contacting Animal Concerns Research and Education Society (ACRES) this morning but was unable to get through.